- The DXY Index is posting its second consecutive inside day, a sign that uncertainty has taken hold of FX markets in the short-term.

- That uncertainty may not linger for long with the BOC, BOE, and Fed all due to make waves today in various forms.

- Retail traders continue to buy the US Dollar, fading advances by EUR/USD and GBP/USD.

After a sharp drop on Monday to start the week, the US Dollar (via the DXY Index) has found some reprieve the past two days, first posting an inside day on Tuesday, followed up by what has been another inside day effort on Wednesday so far. Coming at a time when price is at critical range support dating back to mid-October, the dual inside days speak to an underlying state of uncertainty among traders presently.

Fortunately, the coming 48-hours are saturated with central bank activity, superseding any economic data due out on either Wednesday or Thursday. While the Bank of Canada’s rate decision will be the only activity with any direct implication on where rates goes, both the Bank of England and the Federal Reserve will see their top policymakers speak, which always carries significant risk.

Bank of Canada to Keep Rates on Hold

With the oil industry accounting for nearly 11% of the Canadian economy, the sharp drop in oil prices since the start of Q4’18 has had a materially negative impact on rate expectations: weaker oil prices translate directly to slower growth, which undermines a hawkish BOC.Accordingly, rate hike odds for today’s January BOC meeting have dropped from 85% on November 2, 2018 to 0% entering this week, with a 21% chance of a 25-bps rate cut.

Over the next few months, overnight index swaps see rate cut odds subsiding back to 0%, and as it stands, rates markets aren’t pricing in greater than a 25% chance of a rate cut or hike at any point through June 2019. We’re expecting the BOC to signal that it’s firmly in a neutral policy stance, with the implicit understanding that energy prices will determine the next policy move.

BOE’s Carney has a Chance to Make Some News

To the BOE’s credit, they have followed through on their promise to keep monetary policy on hold in the run-up to the March 2019 withdrawal deadline. But amid a sharp plunge in energy prices since the start of October, UK inflation expectations have started to slump, largely in line with declines experienced by both EU and US inflation expectations. As such, with both Fed and ECB policymakers suggesting that policy normalization could be put on pause in light of recent data, now would be the appropriate time for BOE Governor Mark Carney to join the chorus without risking looking like he’s trying to put his finger on the Brexit scale.

Normally, the release of the FOMC meeting minutes would garner top billing in any given week. In general, traders comb through the minutes to gauge the mood of policymakers to hopefully understand what they will do next. But following Fed Chair Jerome Powell’s speech at the American Economic Association’s Annual Meeting on Friday, it seems that the December FOMC meeting minutes will be outdated at best.

During his speech, Fed Chair Powell’s message was clear: future rate hikes won’t materialize as quickly as previously anticipated. He noted that the central bank was listening “carefully and sensitively” to the “market’s risk concerns” and it could “shift the process” of balance sheet normalization if necessary, as there was "no preset path for policy.” This is a stark change from the December FOMC meeting, where the Fed indicated that balance sheet normalization would be automatic. If the minutes are outdated, then his speech tomorrow at the Washington Economic Club will certainly garner more attention. 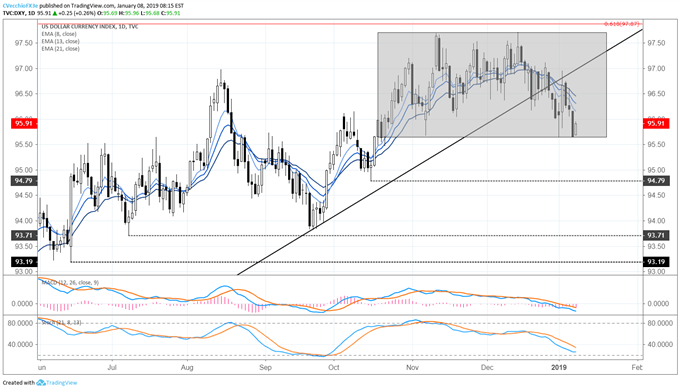 The DXY Index’s back-to-back inside days have helped price remain within its near-three-month consolidation between 95.65 and 97.72, although holding at support does not mean that the attempted breakdown is finished just yet. At present time, the technical structure indicates that a bearish resolution is still the most likely near-term outcome. The rebound at the start of January failed to retake its uptrend from the April and September 2018 lows, resulting in the DXY Index falling back below its daily 8-, 13-, and 21-EMA envelope. Accordingly, both daily MACD and Slow Stochastics continue to point lower as they trend deeper into bearish territory. It thus remains that a breach of the weekly low of 95.65 is needed to validate the bearish bias into a call for a top.