- A rebound in topline inflation, despite the core weakening for the third consecutive month, keeps the Federal Reserve primed to hike rates again next month.

- The US Dollar rebounded off of its session lows around the October inflation report; the DXY Index stayed lower overall as attention remained on the British Pound and the latest Brexit updates.

The first meaningful US economic data release of the week has helped the US Dollar move off of its session lows. Headline October US CPI met expectations right on the nose, coming in at +2.5% from +2.3% previously (y/y). With average hourly earnings in at +3.1% y/y, real wage growth continues to trend positive in the United States for the third consecutive month. It is worth noting, however, that core inflation came in at +2.1% y/y versus +2.2% y/y expected.

The inflation figures arrive at a time when attention has shifted away from Federal Reserve policy, instead having been trained on the US midterm elections, Brexit, and the Italian budget saga. The US Dollar and US economic data, especially on a day like today when a key Brexit hurdle is due to be cleared, are certainly playing second fiddle, and it’s likely that the information is soon forgotten about under a deluge of information out of Europe.

It’s worth reminding that Fed Chair Jerome Powell has said that the economy’s ‘neutral rate’ (the breakeven short-term rate that theoretically keeps an economy from overheating or underperforming – the Goldilocks level, if you will) may be higher than previously anticipated. Accordingly, with the unemployment rate at its lowest rate in nearly half a century and inflation above the Fed’s medium-term target of +2%, more rate hikes are coming. A December rate hike still looks like a lock (75%), the rates markets are toying with the idea of the first hike of 2019 arriving in March (51%). 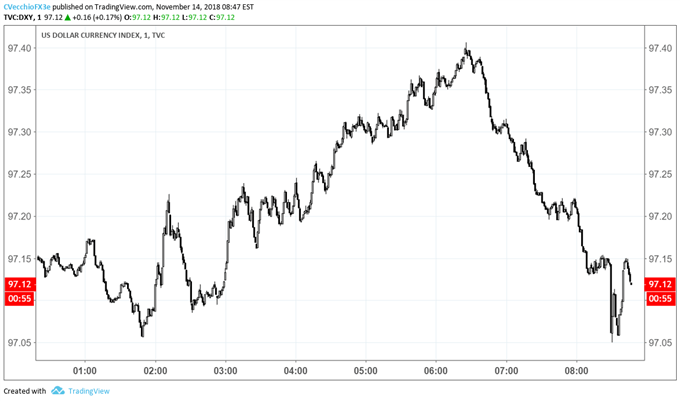 Following the inflation report, the US Dollar was able to halt its downtrend intraday, even if losses remained overall. The DXY Index initially dropped from 97.14 to as low as 97.05 following the release, but was trading back higher at 97.12 at the time this report was written.