Dollar Up, Euro Down as Italy Budget Drama Takes Another Turn

- A senior Italian government official cautioned that the new budget could be rejected by the European Commission again, noting that a sovereign credit rating downgrade could follow.

- Italian BTP yields are rising once again, weighing on EUR/USD ahead of the September FOMC meeting minutes later today.

Looking for longer-term forecasts on the Euro and the US Dollar? Check out the DailyFX Trading Guides.

The US Dollar (via the DXY Index) may not have seen much net-change over the past week, but today price is testing the highs over the past week as the Italian budget saga has taken another turn. Just yesterday, signs were pointing to a deal being secured, allowing the Euro some breathing room as Italian BTP yields fell.

But with Italian bond prices dropping again, the Euro has hit the skids ahead of the US cash equity open on Wednesday. Earlier, a senior Italian government official cautioned that the new budget approved by Rome could be rejected by the European Commission again. Likewise, with rating agencies reviewing Italy's sovereign credit rating, the official also said that ratings downgrade could follow.

The latest turn in the Italian budget drama comes amid an uptick in volatility across financial markets. Lingering in the background is the outcome of the EU-UK Brexit summit this week, and based on the comments from various EU and UK officials, a deal is either 1) close to be clinched, thereby avoiding a 'hard Brexit,' or 2) lightyears away from happening. The outcomes appear to be so disparate that GBP-crosses appear destined for a big move no matter what (the proper exposure for long vol without preference for direction would be akin to long straddle using options).

Elsewhere, as attention will be honed in on the news wire, market participants will be watching for the release of the September FOMC meeting minutes later today. The September policy meeting delivered a 25-bps rate hike as well as a new Summary of Economic Projections, neither of which produced much of a surprise to anyone. The median dot plot continues to price in one more 25-bps rate hike in 2018 (December); this outlook was maintained in the June, July, and now September policy statements.

Accordingly, the September meeting minutes will be parsed to see where Fed officials see rates going in 2019. Recent conversation about the ‘natural rate’ has boiled down to the notion that there may be more rate hikes left in the cycle, meaning rates will go higher than previously expected. This much is known, however, particularly in the wake of Fed Chair Powell's comments in the interim periods since the September FOMC meeting, so the impact on the US Dollar may be limited. 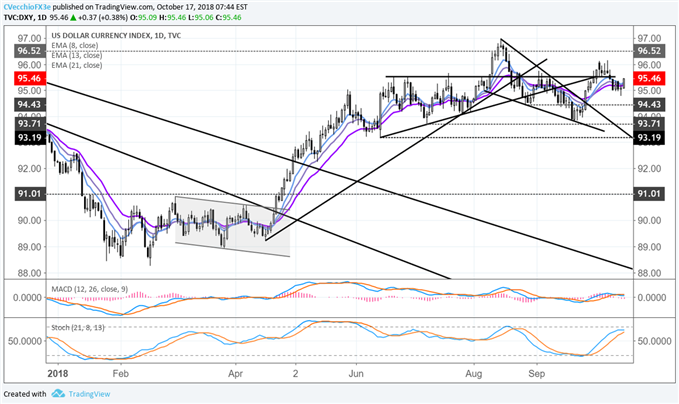 Taking stock of performance thus far in October, the DXY Index is trading today at levels seen on October 1. Thus, while there has been some volatility, there hasn't been a clear direction. Even though price is back above its daily 8- 13-, and 21-EMA envelope, the moving averages are not in sequential fashion. Both daily MACD and Slow Stochastics continue to compress, though they remain in bullish territory. The lack of clarity among the indicators suggests the outlook for the US Dollar remains appropriately neutral.