- Neither the BOE nor the ECB changed policy this week, but the hopeful tones employed gave room for the British Pound and Euro to rally.

- Weakness in the DXY Index is threatening a break below the late-August swing lows near 94.43.

- Retail trader sentiment has turned back to 'neutral' for the US Dollar, and is quickly moving in a 'bearish' direction.

The US Dollar (via the DXY Index) has come under a good deal of pressure this week, posting its fourth consecutive losing day on Thursday and sixth out of seven overall. Now, a fifth consecutive losing day is in sight on Friday. Economic data, central bank decisions, and global trade war tensions have all been at the forefront this week, to the US Dollar's detriment.

Yesterday's release of the August US CPI report paved the way for US Dollar weakness into the weekend, with both the headline and core inflation readings coming in below expectations. While rate expectations are still solid for the week after next's FOMC meeting (Fed funds still pricing in >95% chance of a 25-bps hike), December odds have fallen slightly (80% on Wednesday to 73% today).

But central banks have been perhaps the biggest influencer over the past 36-hours, more so than the 'high' rated US inflation report. Emerging markets have seen contagion fears ease after the Turkish central bank raised its key rate by 625-bps on Thursday morning to 24.00% in an attempt to arrest the Turkish Lira's decline. Stability in the Lira is good news for EUR/USD, given the European banking system's exposure to Turkish borrowers.

If the US Dollar, as a safe haven (like the Japanese Yen), was primed for a down day thanks to shifting sentiments around emerging markets, neither the Bank of England nor the European Central Bank did anything that would deter investors from buying EUR/USD or GBP/USD.

It's of little surprise that the BOE meeting produced a small reaction in GBP/USD as Brexit remains the focal point for BOE policymakers. But even when the next Quarterly Inflaiton Report is released in November, it seems unlikely that a rate hike will be on the radar yet. With an EU-UK deal purportedly weeks away, the BOE will continue to stay away from any policy shifts until the first QIR following the March 2019 Brexit deadline - which means a rate hike won't be coming until May 2019 at the earliest.

With respect to the ECB, we've known that policy is on a preset course, so it's not surprising that the plan remains to end the QE program in December 2018 and hike rates by the end of "summer 2019." The small downgrades to the ECB's growth forecasts proved immaterial in the face of ECB President Draghi's greater confidence in the inflation outlook.

Unlike the Fed, the ECB only has an inflation mandate (as opposed to an additional labor market mandate), so any perceived uptick in confidence that the ECB will meet its inflation goal raises the probability of tighter monetary policy moving forward. It's going to take another major swing lower in the Turkish Lira or for Italian bond markets to go belly up before the ECB seriously reconsiders its withdrawal of stimulus. 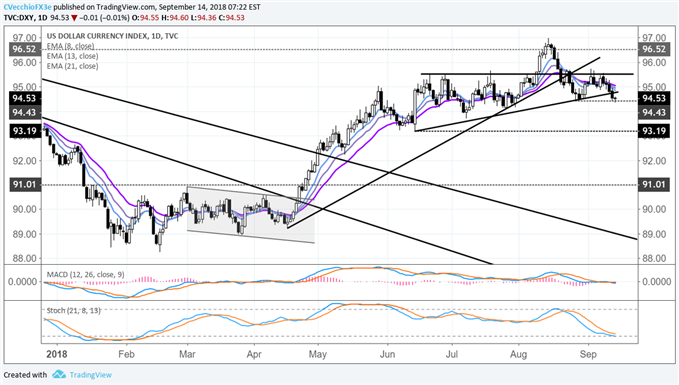 The result of this week's developments have been a US Dollar that is on the precipice of breaking significant near-term support. Price is comfortably below its daily 8-, 13-, and 21-EMA envelope, while both daily MACD and Slow Stochastics have turned lower in bearish territory. A move below the late-August swing lows near 94.43 would warrant a downgrade in the US Dollar's near-term outlook from 'neutral' to 'bearish' heading into next week.