DXY Index Working on Bullish Outside Engulfing Bar after NFP

- The August US Nonfarm Payrolls report was all-around solid, helping pave the path to a positive close for the DXY Index in the first week of September.

- However, concerns loom large as traders await the next shots in the US-China trade war and pressure on emerging market currencies continues.

- Retail trader sentiment has become more favorable for the US Dollar in recent days.

The US Dollar (via the DXY Index) is primed to finish the first week of September in the black after an all-around solid August US Nonfarm Payrolls report. With wage growth perking up to match its fastest pace since May 2009, any remaining doubt about the Federal Reserve hiking rates has been all but eliminated: there is greater than a 95% chance of a 25-bps hike later this month.

Yet he US Dollar's gains have been largely driven by changes in pricing beyond September: odds for a fourth and final hike in 2018 in December have risen from 63% to 70% today. It stands to reason that if the US Dollar is going to benefit from speculation over the Fed's hike timeline, it will revolve around pricing for the December hike, not September.

With the certainty of tighter US monetary policy over the coming months increasing, it won't be long until emerging market concerns are back in the spotlight. After all, it's been the rise of interest rates and withdrawal of stimulus from central banks in developed market economies that has led to the pressure we're seeing on the BRATS currencies - Brazil, Russia, Argentina, Turkey, and South Africa.

Moreoever, now that the comment period for the next round of Chinese trade tariff has passed, it is only a matter of time until the next shots are fired in the US-China trade war. While US equity markets have thus far ignored the tensions, trade war concerns are making themselves apparent in recent economic data, suggesting the rest of 2018 will be filled with more friction (particularly in the lead up to the midterm US elections in November). 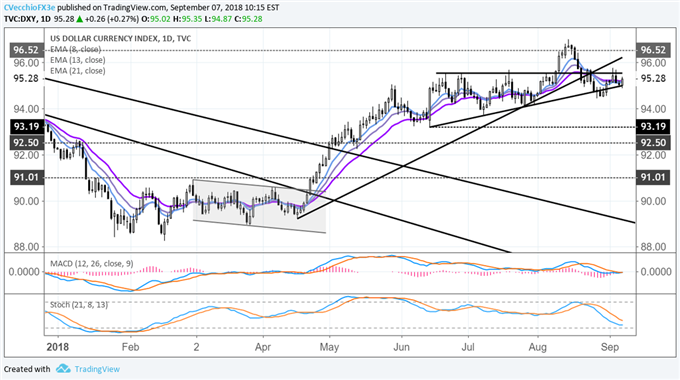 On the technical side, the DXY Index retains its favorable footing in the short-term, particularly if the day finishes with a bullish outside engulfing bar. Price is still above its daily 8-, 13-, and 21-EMA envelope, daily MACD has turned higher at its signal line, and Slow Stochastics have arrested their turn lower. Accordingly, a 'neutral' bias is still applicable at the moment, but further price development through prior key resistance at 95.53 would give cause for an upgrade assessment moving forward.