US Dollar Outlook for the May FOMC Meeting

- The FOMC meets today at 14 EDT/18 GMT and while no rate move is expected, the policy statement should have a hawkish hue.

- Retail traders are net-long EUR/USD for the first time since April 6, a contrarian sell signal.

The US Dollar (via the DXY Index) has seen its near two-week rally stall at a band of key resistance, the 92.50/65 zone produced by the November 2017 swing lows and January 2018 swing highs. The pause, coming just ahead of the May FOMC statement, is to be expected, as volatility and directional movement in FX markets typically cools off in the run-up to a central bank meeting.

While the FOMC decision today will likely produce no change in rates, that doesn't mean that traders will be sitting on their hands for long.Indeed, as a non-SEP (Summary of Economic Projections) and a non-press conference month, the odds of a policy change in May are low to begin with.

But given recent changes in inflation - headline CPI and core CPI are above the Fed's medium-term target of +2% (at +2.4% and +2.1% y/y, respectively) and core PCE (+1.9% y/y) is not that far behind - it seems highly likely that the FOMC will make subtle shifts in the language in its policy statement to signal additional tightening steps in the coming months.

To this end, Fed funds futures are now pricing in 25-bps rate hikes in June (94% implied probability), September (78%), and December (54%). While a December rate hike is the least certain of the three, ongoing acceleration in inflation figures to keep the Fed on a path of gradually raising rates at meeting that coincide with the release of new Summary of Economic Projections.

The move higher in both yields and rate expectations have proven a potent catalyst for the US Dollar, which may have indeed just bottomed out in the near-term. An inverse head and shoulders pattern that took shape in March and early-April broke out to the topside in mid-April, and the DXY Index has sustained a move back above 91.01, the 2017 low and clear resistance during attempts higher in mid-January and early-March. Likewise, price is above the descending trendline from the March, April, November, and December 2017 swing highs. 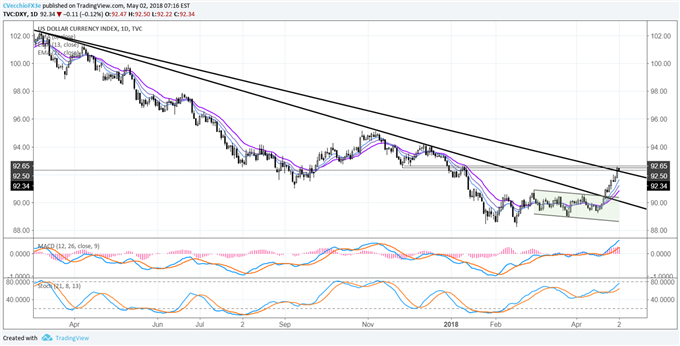 With US Dollar bullish momentum picking up the to the topside - price is above the daily 8-, 13-, and 21-EMAs in sequential order, while both MACD and Slow Stochastics are trending higher - the base outlook for the US Dollar at present time is to buy dips. Accordingly, even if the FOMC decision today produces a minor USD pullback, it's a pullback that traders should be willing to get long into assuming the FOMC continues to signal up to three rate hikes are coming in 2018.

See the above video for technical considerations in the DXY Index, EUR/USD, GBP/USD, USD/ZAR, AUD/USD, NZD/USD, Gold, and the S&P 500.