US Dollar, Hanging on by a Thread, Turns to CPI & Retail Sales

- The US Dollar is flat on the day as the DXY Index is barely holding onto its daily 21-EMA as support.

- The most appealing places right now might be USD/JPY and USD/CHF, given these pairs' sensitivity to US interest rates and their relationship to risk dynamics.

The US Dollar is flat on the day as the DXY Index is barely holding onto its daily 21-EMA as support. Following the release of the September FOMC meeting minutes, market participants have become more sensitive to incoming inflation data, as policymakers made clear that many believed low inflation was a feature, not a bug, of modern advanced economies. With two ‘high’ importance US economic releases on the calendar today, including the September US CPI report, there is an opportunity for the greenback to stem its recent losses.

These figures aggregately have started to push back towards the Fed’s medium-term target, and would represent removing the biggest obstacle to the Fed following through on its plan to raise rates one more time before the year is over (even if some of the upside pressure is due to supply chain issues following Hurricanes Harvey and Irma). Any impact on the US Dollar will be vis-à-vis the glide path pricing channel. 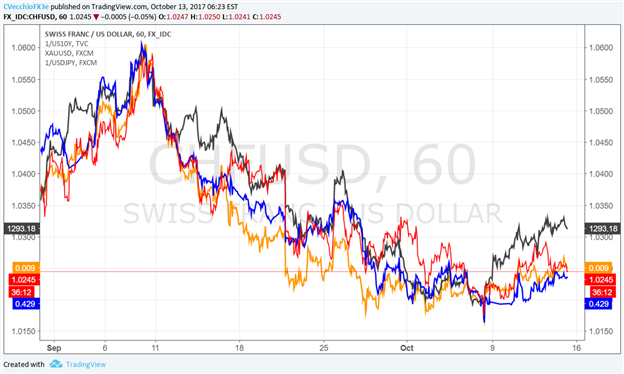 Accordingly, around the data and into next week, following the loss of the DXY Index’s bullish posture, selection for long USD exposure needs to be discriminatory until the DXY offers a clearer signal for a broad US Dollar bias. The most appealing places right now might be USD/JPY and USD/CHF, given these pairs' sensitivity to US interest rates and their relationship to risk dynamics. Throughout September and October, Gold, US yields, USD/CHF, and USD/JPY have traded synchronously, and this should for the foreseeable future. 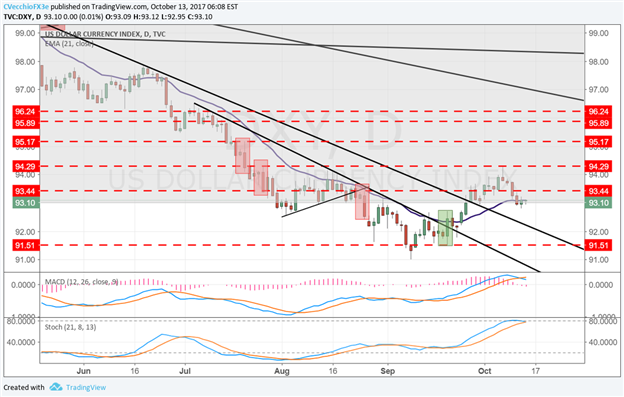 With the US Treasury 10-year yield pulling back to its daily 13-EMA (has been support on a closing basis since September 12) following a retest of the July highs,it would appear today would mark an important day for the greenback. A further drop in yields through current support would suggest that the US Dollar turn since the middle of September is finished.

Yet should we see strong consumption and inflation figures this morning, US yields should find no trouble rising from current trend support. USD/JPY has maintained its gains above daily 21-EMA, while also holding above symmetrical triangle resistance going back to the January swing highs. Concurrently, USD/CHF is holding its daily 13-EMA after a breakouttest of 0.9730/70 last week.

Read more: Webinar: Central Bank Weekly: What’s the Next Move for the Fed & the US Dollar?