- Next major hurdle for DXY Index to clear is 93.44, the bearish outside engulfing bar from August 25.

- Retail trader sentiment is shifting rapidly in EUR/USD and USD/JPY after recent moves.

The US Dollar has hit its highest level in a month versus the Euro, fueling speculation that the greenback may have finally bottomed after its most recent two-month swing lower.

While the US Dollar has rallied on its own merits, price action in the Euro since the German elections over the weekend has reinforced the US Dollar bottoming effort, particularly via DXY Index, where the Euro is 57.6% of the total composite. Note that both the bullish outside engulfing bar in the DXY Index on September 20 and the bearish outside engulfing bar in EUR/USD on September 20 have both seen follow through in recent days.

A lower margin of victory for Angela Merkel, who otherwise won her fourth term as German chancellor, has fueled concern that growing domestic discord in Germany may prevent Chancellor Merkel from taking the hands-on approach towards the broader Euro-Zone than she has in years past.

It would thus appear that the tape has run out for the 'European political risk' trade, with EUR/USD starting to crack the trendline that has carried it higher since mid-April, right before the first round of French elections results. Moreover, the break of this uptrend is taking a rather ominous form: a head & shoulders topping pattern. 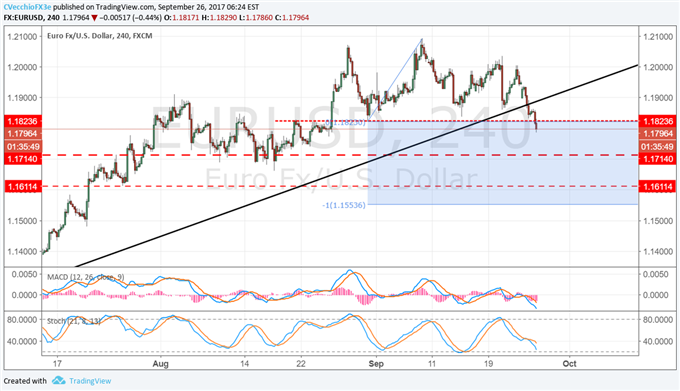 With a head at 1.2092 and a neckline at 1.1823, the EUR/USD topping pattern calls for an eventual move into the mid-1.1500s. With market participants realigning their views to match the Fed's expectations of another rate hike this year - there's now a 63% chance of a rate hike this year, up from 45% pre-FOMC last week, according to Fed funds futures - the US Dollar's rally seems well-supported.

A further rise in rate expectations over the coming months, ultimately converging at 100% in December when the Fed actually raises rates, should be enough to keep EUR/USD's topping process in motion for the foreseeable future. Accordingly, the US Dollar bottom may finally be here - the downtrend since April is in its final throes.

Read more: FX Markets Turn to RBNZ on Wednesday, EZ & US CPI at End of Week