- Markets have been quick to price in Fed hawkishness in the interim period since the last major FOMC meeting (with new SEPs) in September.

- US Dollar (via DXY Index) holding near 13-year highs, but further expectations curve steepening will be required to boost the greenback further.

The December FOMC meeting seems merely procedural at this point. The Federal Reserve will hike its main rate to 0.50-0.75%, citing further tightness in the labor market and signs that inflation should rebound in 2017. The key for the US Dollar today, however, is to what degree of confidence the FOMC has in the US economy, or simply, 'how quickly does the Fed think it will be able to raise rates next?'

A quick look at Treasury rates shows how that traders are becoming more confident in the US economy. As a gauge of long-term growth and inflation expectations, the US Treasury yield curve has steepened on both the short- and long-ends over the past year (chart 1 below). The evolution of US economic data and politics over the past several months has, in investors' minds, increased the potential for tighter monetary policy in the near-term. 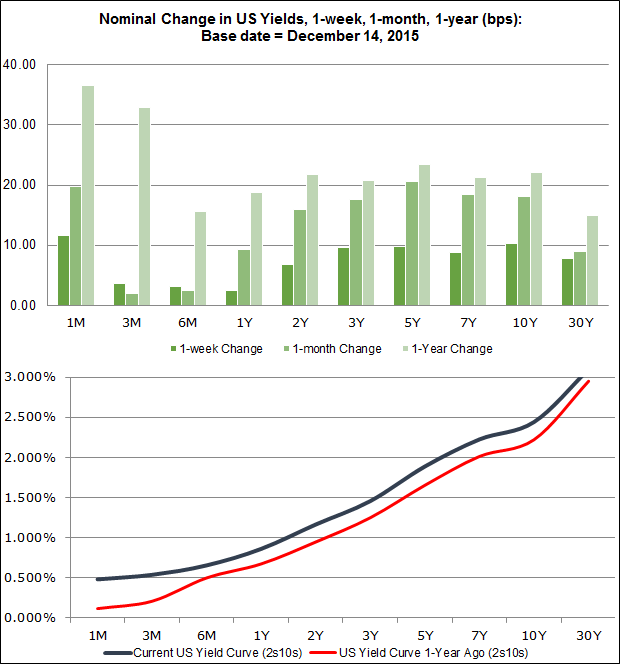 The evolution of the US Treasury yield curve over the past year, but particularly how quickly rates have perked up over the past few months, has seen market expectations realign with the Fed's own forecasted rate path. Whereas at the September FOMC meeting, markets were pricing in one rate hike each of the next three years, now, markets are in line with what the Fed is poised to do in 2017, but may be a bit behind the Fed in 2018. 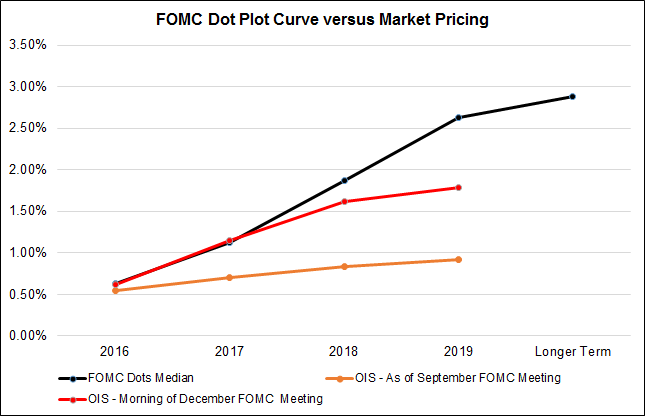 After the past few weeks of US economic data (especially after that the US Presidential elections), markets have been quick to pricing in June 2017 and December 2017 as when the Fed will raise rates next (table 1 below).

Given the high expectations going into today's meeting, the FOMC will need to take on a rather hawkish stance in order to see the US Dollar rally significantly further. EUR/USD itself may be currently predisposed for lower prices (and USD/JPY for higher prices given interest rate differentials), but the FOMC meeting will only yield such a result of the Fed rate hike expectations curve steepens – a difficult scenario to envision seeing as how markets have already moved quite far already.