- Fed Chair Yellen suggests US economy is improving, next rate hike could come in next few months.

- However, speech leans heavily on how Fed will approach issues in the future…which hasn’t been USD-positive.

- See the DailyFX Economic Calendar for the rest of the week.

After a quiet week, the highly anticipated speech by Fed Chair Janet Yellen delivered today at the he Jackson Hole Economic Policy Symposium lived up to its billing. The USDOLLAR Index, mired in an apathetic lull the past several days, is in the midst of posting its widest daily trading range of the week on the back of Chair Yellen’s commentary.

The speech that was billed as a must-watch event by market participants as many were looking for a gauge for when the Fed might hike rates in the coming months. Indeed, even though the focus of the gathering was on the Fed’s long-term toolkit - “Designing Resilient Monetary Policy Frameworks for the Future” – Chair Yellen made clear almost immediately that the economy is approaching the Fed’s inflation and employment goals.

The tone of the remarks was somewhat upbeat and indicated that although economic growth has not been very dynamic, it is enough to sustain further improvement in the labor market. With respect to inflation, Chair Yellen reiterated that the FOMC seens inflation rising to +2.0% over the next few years. In acknowledging the limitations of monetary policy, Chair Yellen emphasized the need for fiscal policy as a complementary tool to enhance economic stability, an obvious (but politically unpalatable) fix to the low growth rut much of the advanced economic world is stuck in.

The positivity about the short-term was handicapped by Chair Yellen’s broader discussion on Fed policy, and as such, the US Dollar advance was cut short rather quickly. Chair Yellen in her addressed repeated that monetary policy is not on a pre-set course, she also underscored that Fed is not actively considering additional tools but highlighted that, in the future, it would be worth looking at a broader rage of asset purchases (QE4, anyone?).

In effect, today, Chair Yellen walked a policy tightrope, in a further attempt to only tighten policy when the US economy is in its ‘Goldilocks’ state – every is just right. Certainly, the discussion about raising rates offers an initial, hawkish hue to her speech; but the broader implication that the Fed’s cyclical peak in rates will be lower than previously anticipated – as indicated by the suggestion that the real neutral rate is near zero and that inflation won’t reach +2.0% for a few years – has hurt the US Dollar. 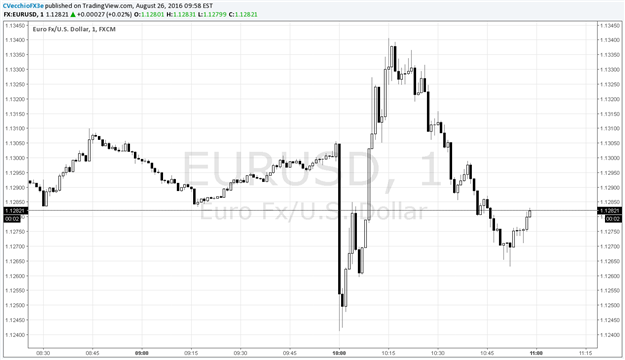 Indeed, as we wrote in anticipation of Chair Yellen’s speech today, it seems the conflicting nature of the commentary (hawkish short-term, dovish long-term) is leaving the US Dollar spinning on its head: a doji is forming on the daily chart. While the USDOLLAR Index may finally be breaking out of its low vol slumber, direction has yet to be found. 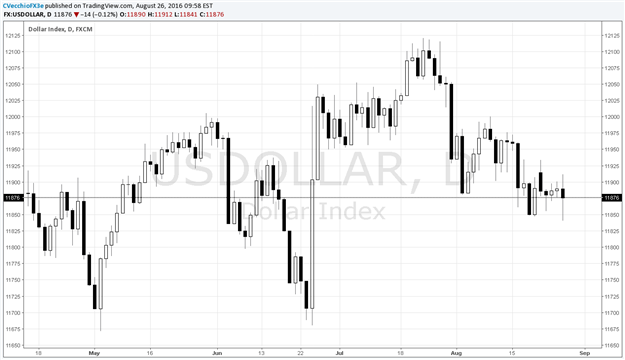