The U.S. Dollar was bid higher against the Japanese Yen while higher-yielding currencies rallied against the majors following July’s better-than-expected July nonfarm payrolls figure. July’s data from the Labor Department, showing an increase in payrolls by 117K following June’s revised 46K increased offers a sigh of relief to market’s following Thursday’s flight to safety, with equity markets around the world dropping anywhere from near 2 percent to over 5 percent.

The figures released on Friday ease concerns that the U.S. economy is falling back into a recession, with the economy adding the most jobs since April, when companies added 217K employees. It also marks the first reading in three months in which payrolls expanded by more than 100K jobs. Similarly, the jobless rate fell as 193K left the labor force, with only 58.1 percent of the eligible American population holding a job.

The Dollar-Yen pair continued its upward trend following Thursday’s intervention by Japan’s Ministry of Finance, in which the government institution swapped ¥500 billion for U.S. Dollars, in order to stabilize the Yen following its near-linear ascent versus the Greenback from early May. The USD/JPY pair advanced nearly 30-pips following the move, back above the 79.000 exchange rate in the minutes following the nonfarm payrolls release, although the pair quickly retraced its surge, moving back into an ascending channel starting back around 10:30 GMT.

Also showing a significant reaction to the better-than-expected jobs data was the Canadian Dollar, which historically has shown that it is more sensitive to data from the United States than the U.S. Dollar is, especially on significant data releases such as the nonfarm payrolls report. Canada is the number one exporter of oil to the United States, so strong data out of the U.S. sends market participants into long-Loonie positions amid speculation an improving economy will boost demand for oil from Canada, thus boosting the Loonie over the long-term.

In terms of other market moving news in the overnight, Swiss National Bank President Philip Hildebrand said that policymakers are “willing to take further measures if those are necessary” in order to weaken the Swiss Franc. He further stated, “At some point, an overvaluation becomes absurd and that is already the case the Swiss Franc today.” The Swiss National Bank, on August 3, cut interest rates to “as close to zero as possible” from 0.25 percent, while simultaneously announcing that it would increase the supply of Francs to the market, in order to artificially devalue the safe haven currency.

Also flying under the radar ahead of Friday’s significant data from the United States was news that European leaders were convening as to discuss how prevent contagion from spreading further through the market, on the heels of yesterday’s massive sell-off in global equity markets and flight to safety. The meeting’s importance is further underscored by the fact that Chinese and Japanese leaders called for global policy cooperation, a clear indication that the Euro-zone’s crisis is at its tipping point. Furthermore, adding to uncertainty, the European Central Bank announced that it would provide limited help, if any whatsoever, to Italy and Spain, noting that it would not begin buying Italian or Spanish bonds.

Following the data release, the Dow Jones FXCM Dollar Index briefly was lifted on the data, climbing from 9592.58 to just above 9610, although within the hour, the index had fallen as low as 9563.07 as risk appetite surged. The rally to risk was short lived, with the index climbing back to as high as 9641.96, at the time this report was written. 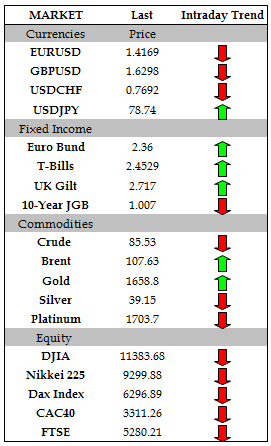 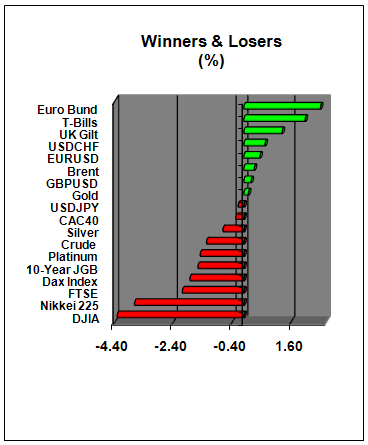