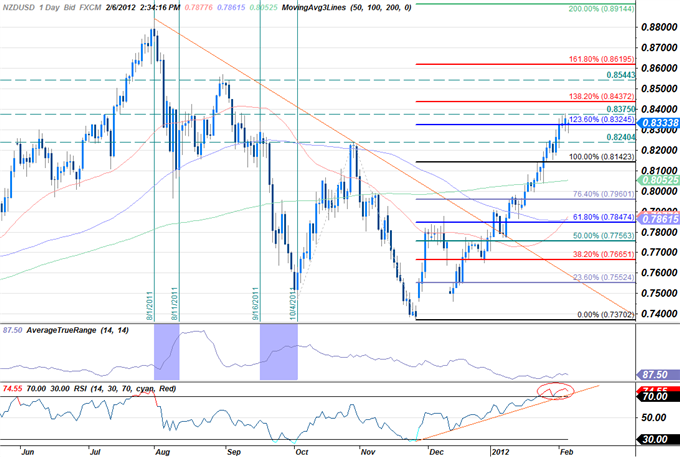 New Zealand Dollar Due for a Pullback- New Scalp Setup

The New Zealand dollar is the top performing currency against the greenback with a year-to-date advance of more than 7.2%. While the kiwi has continued to follow broader market sentiment quite well, the rally seems unsustainable at these levels with our medium-term bias on the pair weighted to the downside. While the pair has remained well-supported over the past month, the run-up now seems to be encountering strong headwinds as the European debt crisis comes back into focus. And with New Zealand’s exposure to European debt topping that of other high yielders such as Australia, the recent advance now offers ideal positioning for kiwi short scalps in the days ahead. This also coincides with classical seasonality trends with the NZD/USD making its high in the first few days of the month with historical data supporting calls for a move lower as we head deeper into February.

A daily chart of the kiwi attests to the pair’s impressive advance after the January 3rd breach above trendline resistance dating to the August 1st record high at 0.8841. Since then, the pair has advanced 18 out of the past 24 days with the daily relative strength index holding above overbought territory for the past 10 days. The last time such a run in the kiwi was seen was in February of 2008 when the NZD/USD pair tumbled more than 35% off the highs as the financial crisis gripped global markets. A close below the 123.6% Fibonacci extension taken from the October 4th and November 25th troughs at 0.8325, puts our scalp in play with a daily RSI break below trendline support dating back to the November low offering further conviction on our bias.

Note that the daily average true range has held near 10-month lows at just 87.50 as a rally in risk and improving broader market sentiment continued to drive prices higher. However as we’ve noted in previous scalp reports, an upswing in daily ATR is often accompanied by dramatic pullbacks in the exchange rate. This can be attributed by the tendency for market see an increase in volatility on substantial risk-off flows as traders jettison lower yielding assets in favor of safety. Evidence of this can be seen back in August and late September when an upswing in ATR saw the kiwi come off sharply against the greenback. 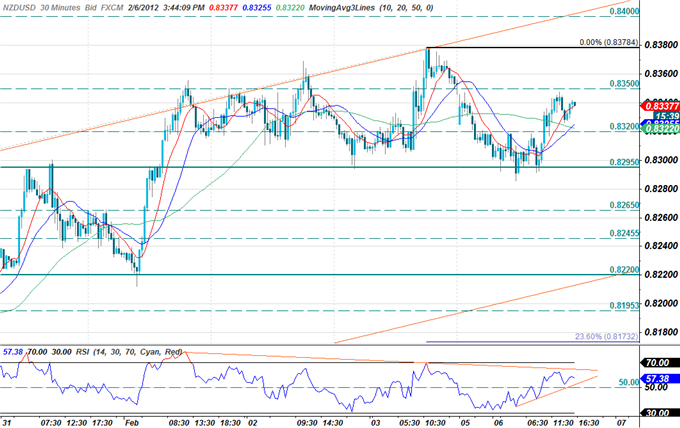 The NZD/USD has continued to trade within the confines of an ascending channel formation dating back to December 15th with the pair failing multiple attempts at a topside breach late last week. Full conviction on our scalp does not come into play until this formation is compromised with a break below channel support risking substantial losses for the kiwi. Interim support targets are held at 0.8320, 0.8295, 0.8265, and 0.8245 with a break below our bottom limit at 0.8220 eying extended break targets at 0.8195 and the 23.6% Fibonacci extension taken from the October 28th and February 3rd crests at 0.8175.

A break above soft resistance at 0.8350 eyes our topside limit at 0.8375. A breach above this level negates our short-term bias with such a scenario eyeing topside targets at the 0.84-figure, and 0.8435. The hourly average true range currently remains to tight for feasible scalps with a 2-hour ATR of 22.36 yielding profit targets of 18-20 pips depending on entry and my take longer to attain. Should ATR pull back dramatically, adjust profit targets as needed to ensure more feasible scalps.

*Note that the scalp will not be active until a break below soft support at 0.8320 or a rebound off 0.8350 or subsequent resistance level with RSI conviction. We will remain flexible with our bias with a move passed our topside limit at 0.8375 eyeing topside targets.

The economic docket for the kiwi offers little in the way of event risk with private wages and labor cost data on tap overnight. Later in the week, investors will be eyeing the 4Q unemployment rate with consensus estimates calling for a print of 6.5%, down from a previous read of 6.6%. That being said, traders should be mindful of the releases and avoid holding scalps through the data print.