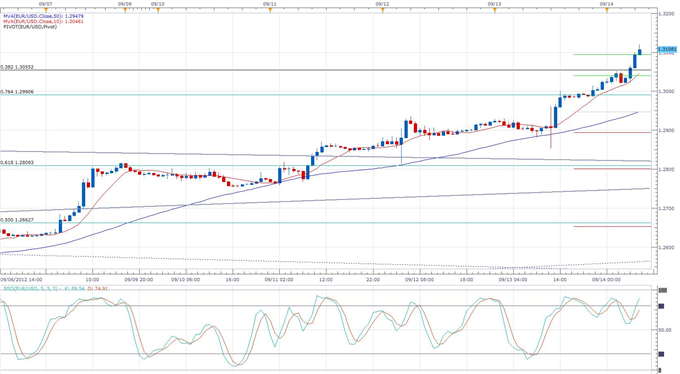 Finance ministers from across the Euro-zone welcomed the conditionality requirement of the European Central Bank’s bond purchase plan, according to Luxembourg PM Juncker’s report from the ministers’ meeting in Cyprus. This would mean that certain terms would be required for the central bank to buy a struggling country’s debt as a means to drive down the government’s borrowing costs. ECB President Draghi said that we now have a fully effective backstop mechanism, he also said that conditionality is needed for bond purchases, adding that overall he sees reason for optimism.

According to Juncker, Spain was also a topic of discussion at the meeting. He said that Spain’s reform program will be ready by the end of the month. European Commission VP Rehn said that Spain’s fiscal targets are within reach, and restructuring the banks is fully on track.

Additionally, Juncker said that in only a few days we will receive more details about the ESM ratification. That was quickly followed by EFSF CEO Regling saying the ESM will be operation on October 8, thereby confirming earlier comments from other officials.

In relation to Greece, Juncker said that he confirms that you can exclude the option of Greece leaving the Euro. However, a more pessimistic tone was heard from Sweden’s Borg, who said that indications are that Greece’s program is off track. Greece is supposed to deliver its budget cut proposal to the Troika today for review before the next round of bailout payments.

Additionally, the German parliament has invited Draghi to address them about the OMT bond purchasing plan. This follows Draghi’s recent comments about how the ECB is still at odds with the Bundesbank over the program.

In Spain, the public debt rose to 75.9% of the GDP in the second quarter, raising concerns over the country’s deficit targets. In Q1, the public debt only totaled 72% of the GDP. PM Rajoy is currently deciding if to ask for another bailout and/or submit to the conditions of the ECB’s bond purchase program.

In the markets, the risk appetite following yesterday’s QE3 announcement continued today with the optimistic comments following the Euro-zone finance ministers’ meeting. Italy’s 10-year bond yield fell below 5% for the first time since March. EURUSD rose 100 points past the key 1.300 line. Resistance could be provided by 1.3284, by the early May high before the month’s sharp drop-off.