Gold prices fell overnight and remain under pressure in Asia-Pacific trading amid rising global bond yields. The benchmark US 10-year note’s yield rose to its highest level since January 09, 2020, as traders priced in an aggressive Fed rate hike outlook. Markets are now pricing in four rate hikes this year, with overnight interest swaps showing a possible 50 basis point hike in March. The Federal Reserve’s January rate decision will cross the wires next week when rate traders will key in for the latest clues on the Fed’s path.

Higher government bond yields, especially Treasuries, typically hurt gold due to it being a non-interest-bearing asset. However, lofty inflation expectations have helped support bullion prices. In addition to gold’s inflation hedging appeal, investors tend to like the yellow metal during times of increased market volatility. That may explain why spot prices are down just two-tenths of a percent this week so far versus high-beta assets like US stocks, which saw heavy losses overnight.

The volatility hedging attribute of gold is also being boosted by geopolitical instabilities in Eastern Europe. The United States believes Russia may launch an invasion into Ukraine at any time. Moscow has continued to direct military assets to the Ukrainian border despite mounting international pressure, with troop levels reportedly north of 100k soldiers.

Gold historically outperforms other major asset classes during periods of major military conflict, specifically at the onset of conflicts. That said, a Russian incursion could be a major boon for bullion that would support a rush of haven buyers. The US Secretary of State, Anthony Blinken, is scheduled to meet with his Russian counterpart later this week in another attempt to find a diplomatic solution. Meanwhile, the United Kingdom is reportedly supplying anti-tank weapons to Ukrainian forces in a move to dissuade Russia. Altogether, tensions remain near a potential boiling point.

Gold has been falling slightly since last week when prices failed to climb above major resistance near the 1830 level. The rising 200-day Simple Moving Average (SMA) may underpin prices this week, with the key SMA directly below current prices. A break below that would open the 1800 psychological level up for a test. Prices may continue to trade within these major support and resistance levels until a fundamental catalyst triggers a directional move. 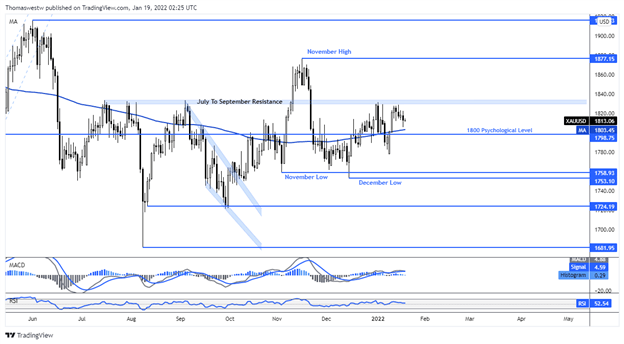