Crude oil prices aimed lower over the past 24 hours. This is despite OPEC and its allies, known as OPEC+, deciding to maintain oil output increases at 400k barrels per day for December. This came as a disappointment to the United States, where President Joe Biden has been repeatedly asking the oil-producing cartel to raise output further to support the post-pandemic global economic recovery.

Markets are forward-looking, and the hesitation from OPEC+ to raise production likely raised speculation that the United States may tap into its strategic petroleum reserves to bring much-needed supply into the market. The White House reiterated later in the day that it will use ‘the full range of tools’ to protect the economy.

Over the remaining 24 hours, WTI will be closely watching October’s non-farm payrolls print. The world’s largest economy is expected to add 450k jobs versus 194k prior. This is as average hourly earnings continue to grow at 4.9% y/y from 4.6% prior. A strong print could hint at rising growth, opening the door for WTI to reverse higher. But, this may also raise calls for the Biden Administration to release reserves.

WTI crude oil prices broke under a rising trendline from August on the 4-hour chart below. This could hint at further losses to follow. Still, keep a close eye on the 200-period Simple Moving Average (SMA). A breakout below it could be the confirmation for the trendline breakout. That would place the focus on the 38.2% Fibonacci extension at 76.35. Otherwise, a bounce off the SMA may open the door to a retest of the key 84.62 – 85.39 resistance zone. 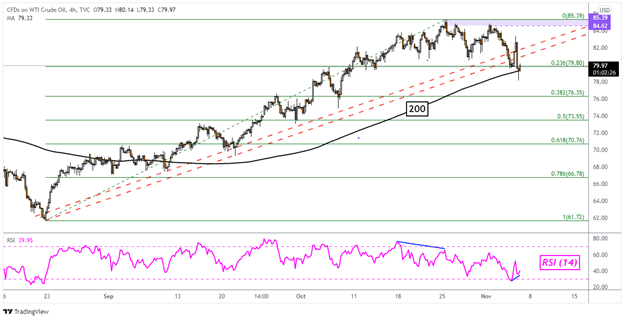 According to IG Client Sentiment (IGCS), about 54% of retail traders are net-long WTI crude oil. Downside exposure has decreased by 16.81% and 20.37% over a daily and weekly basis respectively. We typically take a contrarian view to crowd sentiment. Since most traders are now net-long, it suggests that prices may fall. This bearish-contrarian trading bias is being further underscored by recent shifts in positioning. 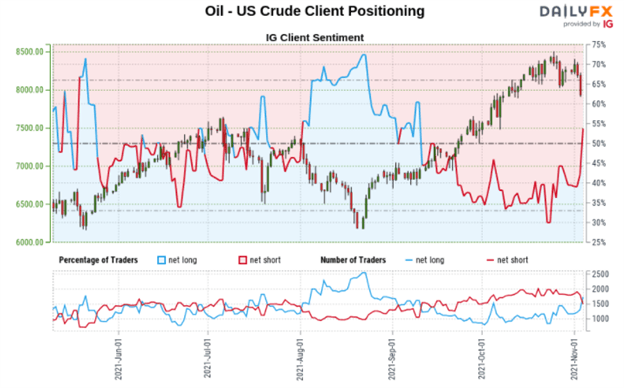