Crude oil prices tracked higher against the backdrop of improving risk appetite yesterday, inching upward alongside the bellwether S&P 500 stock index. Meaningful trend development proved absent as expected however, with the WTI benchmark managing little more than a nudge of the narrow congestion range that has confined it for the better part of two months.

Gold prices likewise managed gains as the risk-on mood dulled the appeal of cash and weighed on the US Dollar, speaking to the metal’s anti-fiat credentials. Tellingly, real interest rates pushed deeper into negative territory, encouraging capital flows toward alternative stores of value. Bullion has now managed to retrace over half of last week’s steep selloff and stands to challenge the $2000/oz threshold once again.

Looking ahead, second-quarter earnings reports from US retail giants Walmart, Kohl’s and The Home Depot are in focus. Household consumption is by far the most dominant driver of growth in the world’s largest economy, contributing close to 70 percent of GDP. With that in mind, guidance from these firms may prove to be formative for the markets’ baseline business cycle outlook.

A downbeat disposition coupled with continued deadlock in US fiscal stimulus negotiations may spook the markets, especially considering the proximity of Wednesday’s release minutes from July’s FOMC meeting. That document may reiterate the central bank’s intent to hold off from expanding its stimulus toolkit further, at least for now. Taken together, this might pressure crude oil and gold prices alike.

Crude oil prices remain pinned below resistance in the 42.40-43.88 area. A daily close above this threshold looks likely to target the $50/bbl figure next. Alternatively, a reversal below swing low support at 38.74 may set the stage to revisit the 34.38-78 inflection zone. 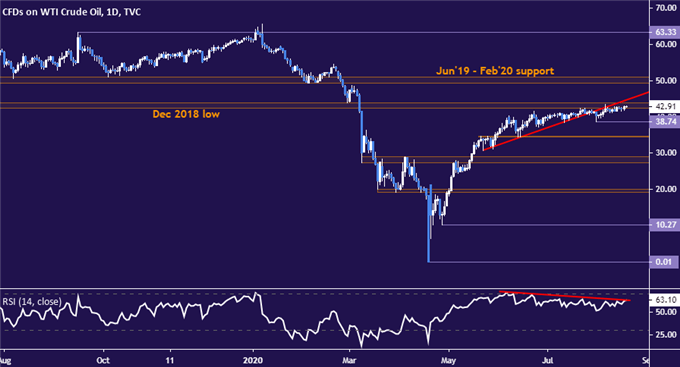 Gold prices are probing the $2000/oz figure once again after rebounding from rising trend line support guiding them upward since March. Establishing a foothold back above this barrier eyes the swing top at 2076.58 next. Alternatively, a move back below 1955.90 puts the bounds of the uptrend back in play. 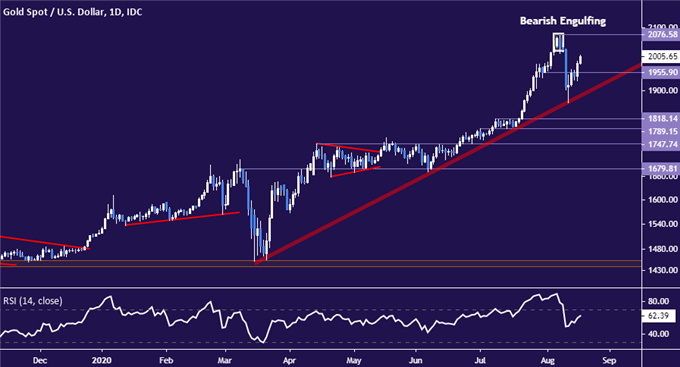