Crude oil and gold prices fell on Friday as the US Dollar roared higher. An initial lift from haven demand amid worries about escalating US-China tension and deadlocked fiscal stimulus talks in Washington DC was compounded by July’s US employment data.

The report showed a 1.76 million rise in nonfarm payrolls, an outcome that topped the 1.6 million expected by economists and the paltry 167k flagged in a leading report from ADP. The jobless rate fell to 10.2 percent, lower than the projected 10.5 percent, and wage growth registered on the strong side (4.8 percent).

The markets seemingly read these outcomes as limiting scope for a near-term expansion of Fed stimulus. Inflation expectations fell while the 12-month policy outlook implied in Fed Funds futures moved to a less-dovish setting. Gold was particularly hard-hit, while oil’s losses were somewhat more muted.

Looking ahead, on-going US fiscal stimulus negotiations may take center stage. The markets offered a conspicuously circumspect response to unilateral White House efforts at offering policy support. Perhaps investors reckoned that these efforts fall short of what the economy requires.

Signs of progress on Capitol Hill may lift economic growth expectations and boost cycle-sensitive crude oil prices. Gold might remain pressured however as such an outcome might make an expansion of monetary support less likely still. Both benchmark commodities may suffer if the impasse persists however.

Crude oil prices are backpedaling from resistance in the 42.40-43.88 area as expected. A breach and daily close below swing low support at 38.74 looks to open the door for a challenge of the 34.38-78 zone thereafter. Alternatively, a push beyond resistance may target the $50/bbl figure next. 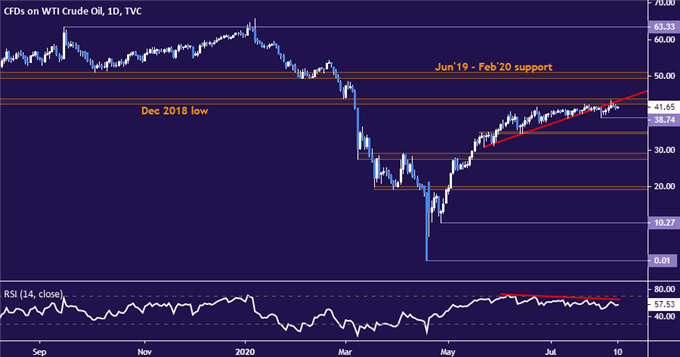 Gold prices put in a Bearish Engulfing candlestick pattern, hinting a top may be in place. Initial support is marked by the 23.6% Fibonacci retracement at 1979.73, with a break below that likely exposing the 38.2% level at 1920.71. Invalidating topping cues probably calls for a daily close above 2076.58. 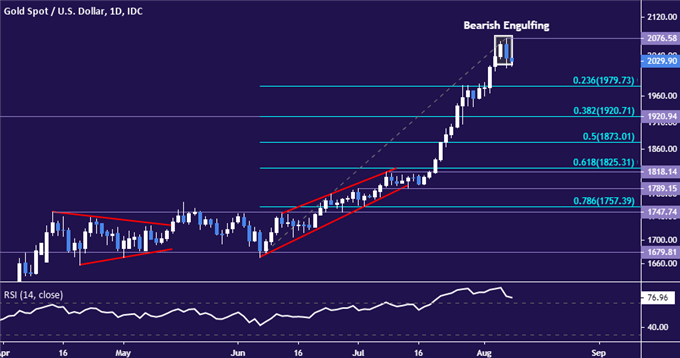