Gold prices retreated in the Asia Pacific region on Tuesday as hopes that the global economy will shortly start to emerge from its coronavirus-induced lockdown buoyed investor appetite for riskier assets.

With paths back to higher levels of economic activity mulled or unveiled across several advanced economies, and New Zealand declaring domestic victory over the virus, this cheer is understandable. However gold prices retain a strong, underlying haven bid supported both by clear economic uncertainty and the prospect of very low interest rates for years. These will depress bond yields and, by the way, prop up demand for non-yielding gold.

Current themes in play are likely to dominate the global session which is short of economic news until US consumer confidence data are released. The ongoing parade of corporate earnings reports will make up the shortfall,

US oil production remained at close to record levels in 2020’s first quarter, even as the horrors of coronavirus became apparent. The contagion has eliminated a huge proportion of energy demand, with some estimated putting the loss at close to a third.

This weakened appetite has come at a time of huge supply. Barring further, heavy reductions in output, or a faster global recovery than anyone expects, that status quo seems likely to linger. 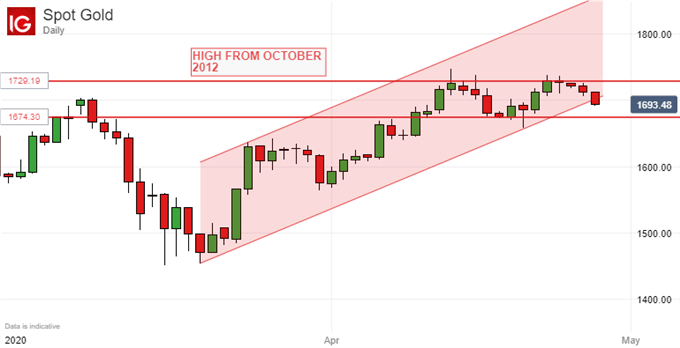 Gold is flirting with a break below its previously dominant uptrend channel but there remains little obvious desire to take major profits at current, high levels. It may be more pertinent to focus on the broad range which had been forming within that channel for a couple of weeks and which remains in play.

Support comes in at $1674.30.ounce, a point which has held the bears back on a daily-closing basis since April 9. A durable fall below this could presage deeper retracement, while a holding action here could see April’s highs revisited even if the appetite to push above them is lacking.

US crude oil remains in the grip of a long-pervasive downtrend with the psychological $10/barrel mark beckoning should April 21’s closing low of $11.38 give way. There seems a little reluctance to push prices down beyond that level, however, although a test of it will come unless that downtrend can be broken.

Near-term resistance is still offered by April 23’s peak of $18.60. It looks safe enough for now give current daily ranges.