Crude oil prices retreated a little in Friday’s Asia Pacific session, coming off a massive one-day gain in the US the previous day.

The rise was prompted by hopes that the Saudi/Russian price war, which last month further crushed prices already hit by coronavirus fears, might be within sight of its end. US President Donald Trump said he had brokered a deal between the two which might lead to production cuts.

However, the situation remains fluid and it appears that the US itself has not offered to reduce its own output. Many investors reportedly doubt that the situation will move on meaningfully while that is the case and those doubts saw prices slip again.

Moreover, while a truce would certainly raise prices, gloomy economic data such as this week’s huge increase in US unemployment benefit claimants only underline the world’s dangerous economic torpor and the likely lasting weakness in energy demand. Crude oil prices have dropped by well over 50% this year, and by no means all of that fall can be accounted for by discord among producers.

For the rest of the day market attention will be divided between headlines on this subject and the approach of official US labor market figures for last month.

Gold prices edged lower with a firmer US Dollar limiting the metal’s appeal. However, the fundamental haven bid into the market remains strong and, while investors have to cope with data such as those jobless claims, it’s likely to remain so.

Worldwide coronavirus cases passed a million on Thursday, with the overall death toll over 52,000 according to Reuters. 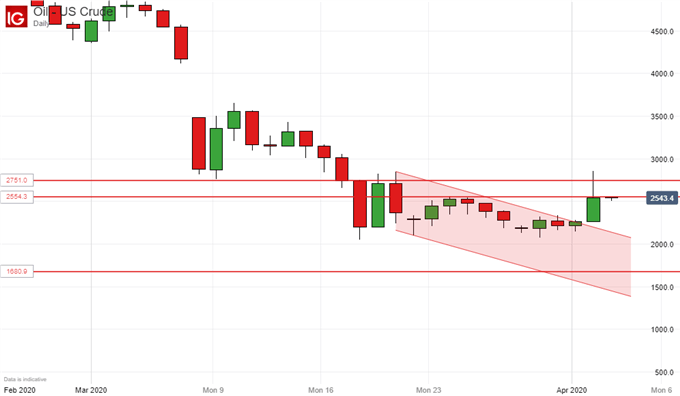 Prices spikes up above a band of resistance from mid-March in Thursday’s US session but the daily close was just about exactly at the band’s lower bound, a point which coincided with March 24’s intraday peak of $25.54/barrel. The bulls are still flirting with that level and a close above it on a weekly basis could be quite bullish technically even if this market is still clearly driven by the fundamentals.

Retracements will eye the top of the previous downward channel which currently comes in at $21.75. 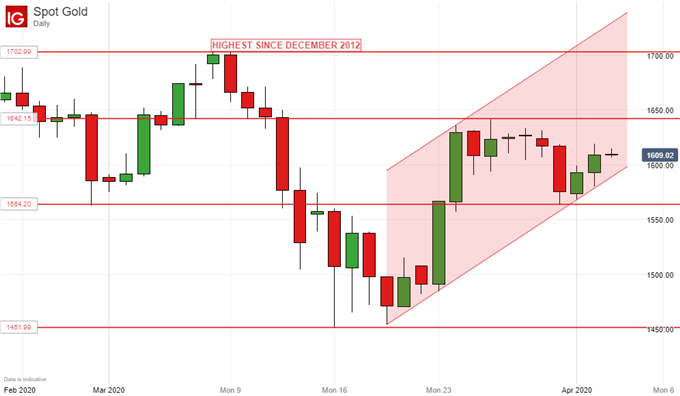 Gold prices clearly remain quite well supported close to the peaks of early March but the still-dominant uptrend channel from much later that month looks to be surrendering to a broad trading band between $1564.20/ounce and $1642.15.

A channel break need not be very serious for the bulls however for as long as that lower level still holds, but this looks like a market that’s going to need some new fundamental driver to ignite a further rally.