Crude oil prices were lower once again on Monday in Asia as the market hunkers down for a perfect storm of collapsing demand and sharply rising supply.

The coronavirus is reportedly expected to see world appetite to slide by between fifteen and twenty-million barrels per day, while an ongoing price war between major exporters Saudi Arabia and Russia shows little sign of abating.

The count of operating US oil rigs fell by 40 last week, according to Industry analyst firm Baker Hughes. That’s the biggest weekly reduction since 2015 and attests to producers slashing spending in anticipation of a huge shortage of final demand. Capital spending in the energy industry is adjusting to the real and horrible prospect of sub-$20 prices as increased supply threatens to leave storage facilities bursting at the seams.

Having been boosted last week by various governmental stimulus and rescue programs aimed at offsetting the worst economic effects of the virus, risk appetite has wilted again as a new week starts. This is probably thanks to the realization that even the largest schemes can’t work until economic agents are free to engage with one another again. At present most are facing some sort of lockdown. This can’t end until infection rates start to fall.

Gold prices edged lower as that risk appetite hit prompted another move into cash. This impulse has dogged the precious metals market as the coronavirus impact has become apparent.

Naturally an environment of overwhelming economic uncertainty leaves haven assets like gold likely to attract a strong underlying bid, but the likely inflation dampening effects of widespread economic lockdowns may make some disinclined to hold gold as a hedge.

Markets a becoming quite inured to catastrophic economic data as the virus does its worst. That said German inflation numbers and US pending home sales figures will attract attention on Monday. 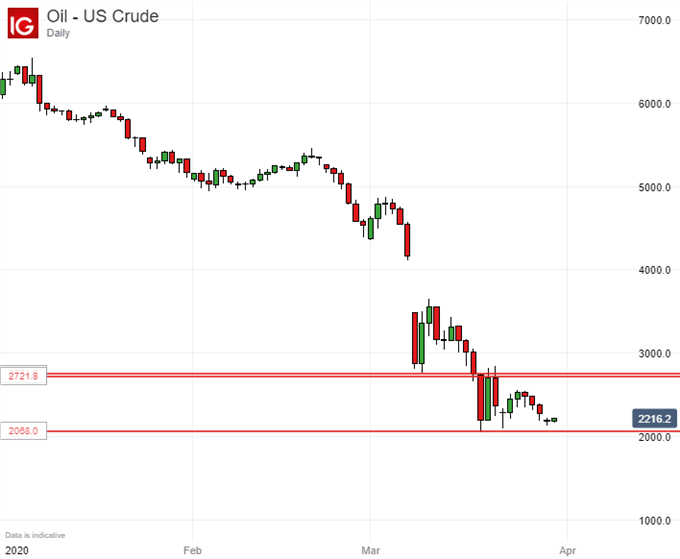 They are currently managing to hold off a test of this month’s near-eighteen-year lows but only by a whisker and a revisit looks likely, possibly in the next couple of days. 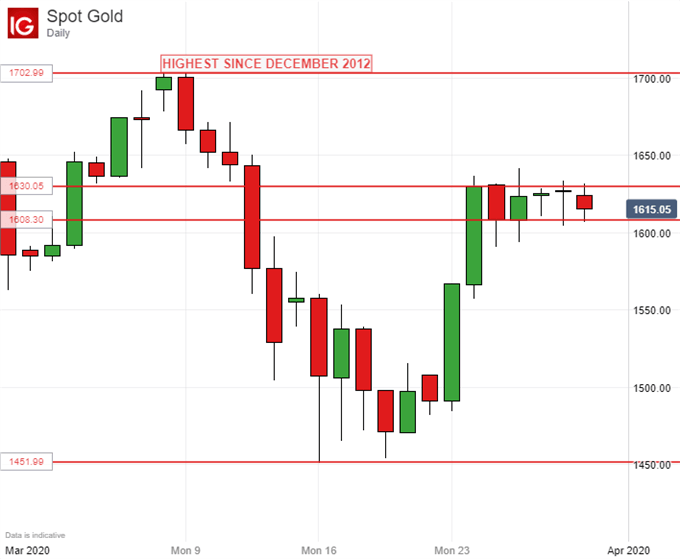 Gold prices may be struggling to make headway, but that underlying haven bid has them confined to quite a tight range which still isn’t very far away from this month’s eight-year peaks.

That trading band will be safe as long as bears can’t force a daily close below its lower boundary at $1608.30/ounce. It’s hardly impossible that they will do so but the bulls have successfully defended that point for just over a week now. They meanwhile have their sights on the range top at $1630.05 and, above that, March 3’s closing high of $1646.12 bars the way back to this month’s peak.