Crude oil prices rose in Asia on Friday after the World Health Organization came out against travel and trade restrictions despite declaring the coronavirus a global emergency in the previous session, having declined to do so earlier this month.

The coronavirus story is very much in charge of this and all markets, however. Oil prices remain down quite substantially for the week, partly as investors fret the effects of this contagion on global growth prospects which were arguably patchy even before the story broke.

These worries are unlikely to unwind anytime soon, and many airlines have halted flights to Chinese cities in any case.

Away from this main story, news of surprise US oil inventory builds have also weighed on the market in the past week, but reports that Saudi Arabia would like to bring the next Organization of Petroleum Exporting Countries meeting ahead to February rather than leaving it in March as scheduled, may be adding some support.

Gold prices initially eased on Friday but soon erased those losses and were up on the day as the Asia Pacific session wound down.

The metal is enjoying a predictable haven bid and has risen nearly 4% this month, but the relative strength of the US Dollar against its major traded rivals has probably capped its gains.

Virus-headlines permitting the market will look to US Personal Income and Spending numbers due for release later in the session. 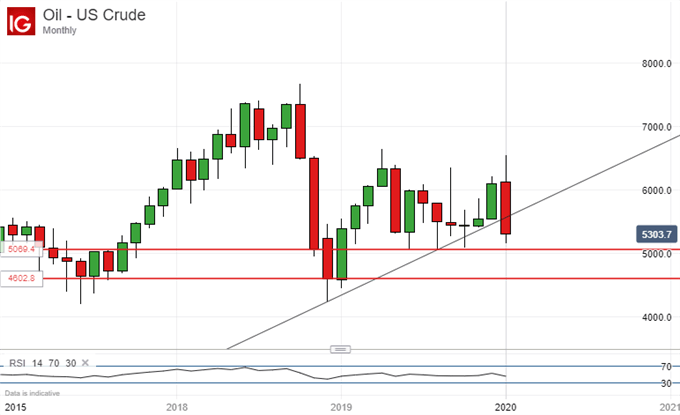 Barring a miracle prices look set for their first monthly close below the previously dominant uptrend line for the first time in a little over a year. This market is clearly being driven primarily by fundamentals, with the spread of coronavirus likely to see further falls, assuming major producers don’t respond with sweeping production cuts.

Technically the monthly chart would appear to have reasonably strong support in the $50.69/barrel region where the bears have been stymied three times since June 2019. A break below that in the coming month, however, would see the psychologically important $50 mark threatened and 2018’s low of $46.03 back in play.

It is highly likely that producers would indeed take action to move prices higher if this point were threatened and investors need to stay mindful of this even if the coronavirus story worsens. 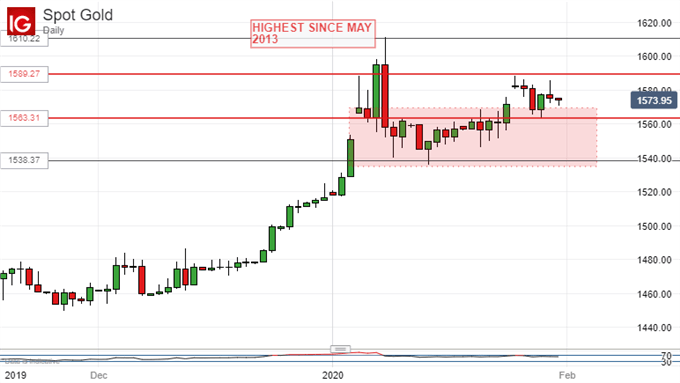 Gold prices seem to have settled into a higher trading range above their previous band but well below this month’s notable highs.

However, while the market clearly remains extremely well supported and comfortable at altitude, recent daily ranges have with obvious exceptions tended to be narrow and there may not be a huge amount of conviction about this new range.

The trade of a new month may be instructive on this point but, even if the market returns to its former trading band there seems little reason to fear any dramatic near-term correction lower.