Gold prices eased just a little through Friday’s Asia-Pacific session. The coronavirus and its spread remain very much in market focus but Thursday’s World Health Organization decision not to classify the outbreak as a global emergency may have helped risk appetite a little.

It’s a close call though, and the market remains in thrall to news headlines. These in turn seem likely to keep the bid for counter-cyclical assets like gold well underpinned and the metal looks set for a week of modest gains.

China has attempted to lock down affected areas, at the time of year when most Chinese travel, and admits to 25 deaths so far from the respiratory illness.

The approaching Chinese New Year break may already be taking a toll on market volume in the region with holidays widespread in the coming days. US economic data showed a smaller-than-expected rise in unemployment-benefit claimants last week, perhaps underpinning risk appetite, while the US Dollar remains close to one-month highs against a basket of it major traded rivals. A stronger Dollar tends to weigh on demand for dollar denominated gold investments.

The coming session may not offer much to tear the markets away from virus-headline watching but, in the economic sphere, Purchasing Managers Index numbers are due from around Europe and the United States.

Meanwhile crude oil prices made modest gains, rebounding from Thursday’s lows. The market remains concerned that a deepening of coronavirus contagion could see energy demand curbed, especially if large numbers put travel plans on hold as has happened in the cases of previous epidemics.

There was some support for prices in news that US crude and distillate stocks fell last week. The Energy Information Administration said on Thursday that stockpiles were down by 405,000 barrels. This was a lower drawdown than the markets had expected, but coming after previous news of supply builds, it may have provided some relief for oil bulls nevertheless.

Prices are continuing the run of relatively narrow daily ranges and closeness between opening and closing levels which have characterized this market since January 9. 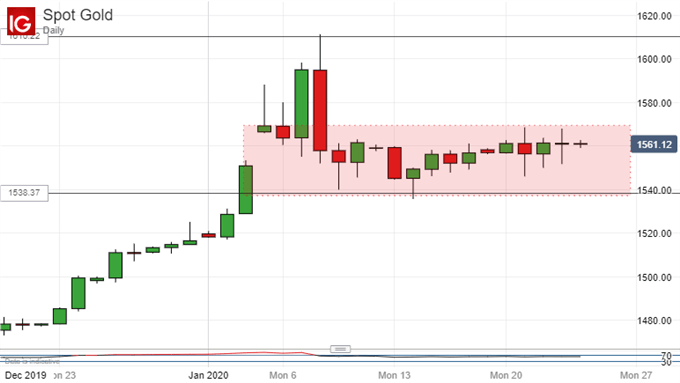 Gold may be below the peaks made earlier but it’s still hanging on at quite-high levels and doesn’t look set to retreat far for as long as coronavirus remains a possible threat to regional growth.

The range in place for the last three weeks has been broadly respected and, while a break either way is likely to be an important directional cue, it doesn’t look as though one is coming up particularly soon. Even if it does, it might be wise to be wary of it at least until the Chinese New Year holiday is out of the way.

Prices have this month soared well above their previously dominant uptrend channel only to collapse in short order well below it. 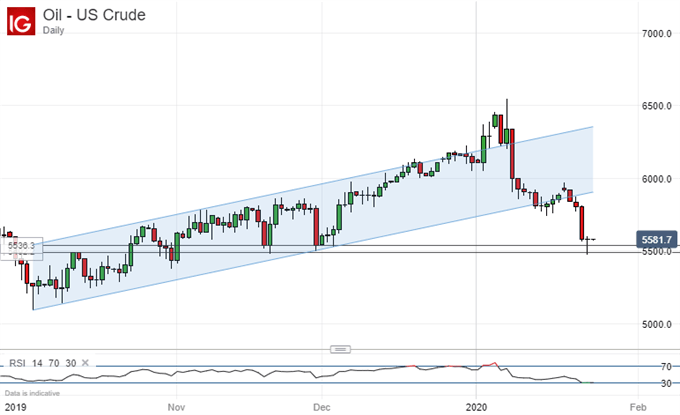 They seem to have based for now above a narrow band of support formed of the daily-close and intraday low points of November 19- December 2. However, the market remains clearly below levels where it seemed quite comfortable as recently as early December and, unless the bulls can mount a stronger defense than has been seen so far, that support looks unlikely to hold. Below it the psychologically important $50/barrel level would be back in focus.