Crude oil prices got a sharp boost Friday as news that the United States had killed a key Iranian military leader, among other figures, in an airstrike on Baghdad.

General Qassim Soleimani was the leader of Iran’s Quds Force, an elite unit within the Revolutionary Guard Corps. He died in the strike as did Iraqi paramilitary commander Abu Mahdi Al-Mohandes. Some sources have claimed that a deputy leader of the Lebanese Hezbollah was also killed. The attack came after days of escalating tensions in the region, and the storming of the US embassy in Baghdad.

US crude oil prices rose by well over two dollars a barrel in the aftermath. Such rises on increased Middle Eastern tensions are not uncommon as investors weigh the effects of any conflict escalation on supply in this crucial region for energy markets. Iran for its part has threatened retaliation.

Oil prices were already supported by hopes for progress on trade between the US and China, with a phase one trade deal still apparently set for signing on January 15. Moreover, production cuts from traditional producers were announced last year and set for application this month. They too are underpinning prices.

However, Friday’s action saw a broad slide in risk appetite with most sock markets taking fright at the US action. This seems to have capped gains for oil prices which are now well below their session peaks. 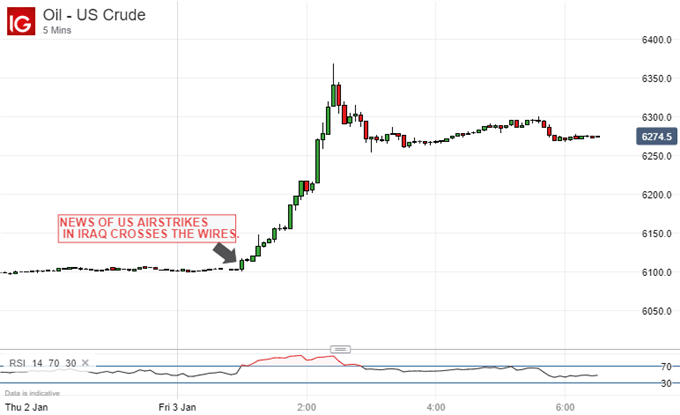 Broadly prices remain well within the uptrend channel which has dominated the market since the start of October and taken prices back up to September’s highs. Assuming global risk appetite will let them, investors will look to the next US inventory data which are coming up on Saturday for the Asia Pacific region. Markets will pay very close attention to these given the run of surprising drawdowns seen in the last two weeks.

Gold Soars as Risk Aversion Kicks Back In

Gold prices got an unsurprising lift from Friday’s events as investors sought safety in such countercyclical assets.

The impetus was strong enough to take the market right up through a resistance zone which had previously capped it, and back up to within striking distance of 2019’s highs. It’s worth noting, however, that prices’ strong acceleration since late December has taken them into severely overbought territory. Gold looked in need of some consolidation before it spiked up on Friday, it looks even more in need of it now. Some caution will be warranted as markets return to full, post-holiday strength next week.