Gold Prices Pull Back Toward February Low On Fed Hopes

Crude oil prices remain trapped in the consolidation of 2017 that followed the dramatic rise over the majority of 2016 after falling as low as $26/bbl in February. On Monday, the fundamentals of the Oil market received a favorable surprise when Iraq noted that OPEC would most likely need to extend output cuts, which have recently seen a 90%+ compliance rate.

The reduction in supply from OPEC in accordance with balancing oversupply that caused much of the downturn in 2014-2016 has been met with strong supply expansion projects from non-OPEC members. Many see this fundamental tug-of-war as a key factor in the lack of price breakout on the back of the OPEC cuts. On Friday, we saw the seventh consecutive rise in active US Oil rigs per Baker Hughes, which shows more supply coming onto the market from US Producers.

Commodities often look to highly correlated markets to get a sense of demand and what probable outcomes could be around the corner. A key component with Gold is how the price responds to anticipated Federal Reserve action, which many looks at the Implied Probability of future rate hikes and USD strength or UST 2Yrd Yields as a key proxy to judge. Over the last two weeks, we’ve seen the probability of a rate hike from the Federal Reserve for the March 15 meeting rise from ~33% to 98% at the time of this writing.

In other words, Fed action in the form of tightening is pricedinto the market. The story to me is that Gold has currently fallen less than 5% since the dramatic rise in rate hike expectations. While we should anticipate Fed action, as the market currently does, it may mean that a significant deterrent to Gold price advancement was only able to take down the yellow metal by ~3%, and we could be in store for more subsequent gains on news that favors Gold demand. 1

GOLD TECHNICAL ANALYSIS – Gold prices pulled further away from the 200-DMA on Monday. The price of Gold pushed away from the 200-DMA ($1,261/oz), where Gold also fell aggressively below on November 9. Many traders are keeping an eye on $1,218/oz, which is the 38.2% retracement level of the July-December range from $1,375-$1,122.5 per oz. A daily close below the 1218 area (polarity point in January/ February) exposes resistance-turned-support failing and changing the structure of the trend. A break below $1,218 would open up the late January low as a target at $1,180/oz. A move above the 200-DMA ($1,262/oz.) would resume the Bullish Bias that we have seen gaining traction since mid-December. 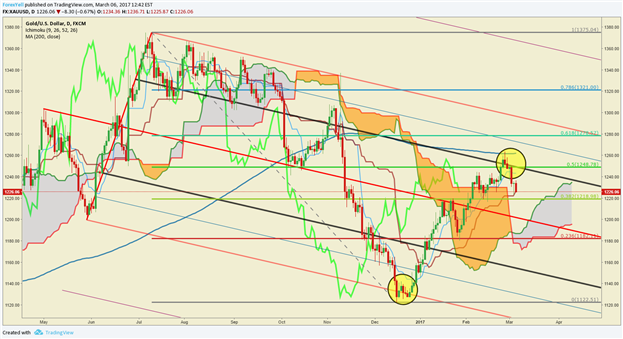 CRUDE OIL TECHNICAL ANALYSIS – Crude oil prices remain stuck in a narrow range, but the longer-term structure appears trend continuation. While there was excitement on the recent run to $55/bbl, it’s quite possible we’re tracing out a larger bullish Triangle chart formation than previously anticipated.

We will continue to favor the patient-longer-term Bullish view absent a move below Triangle top resistance-turned-support at 53.66 aims for trend line support doubling as the Triangle bottom, now at 52.31.A daily close above the 55.21-65 area (January 3 high, 38.2% Fibonacci expansion) targets the 50% level at 57.18 and quite possibly, higher. 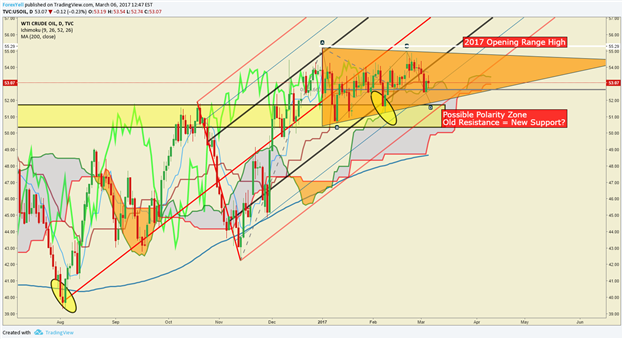