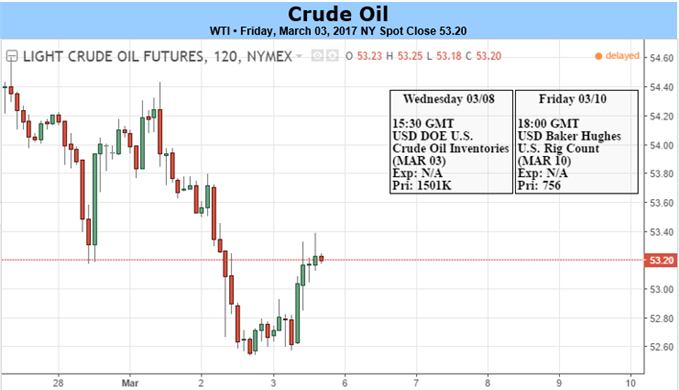 Where will Crude Oil go in the first quarter of 2017? Get our forecast here!

The fundamental picture that supports the Oil market appears to be firing on all cylinders. On Friday afternoon, Fed Vice Chair Stanley Fischer said in a speech, “Almost no indicator has come in badly in the last three months.” Over the last week, we’ve seen the USD strengthen as the market begins to price in the full anticipated three rate hikes for 2017 from the Federal Reserve and start to price in 4 hikes in 2018. The stronger USD seems to have shaken the Oil market, but as we’ll discuss in the technical section below, the price remains above long-term support. Late Friday afternoon, after Janet Yellen’s speech the USD gave back some of its gains for the week, which further lifted Oil back to the 2017 average price of $53.05/bbl.

The Oil market finds itself in a unique spot of the commodity landscape of Q117. A worthy development that came to light this week as price continues to oscillate above $50/bbl was that WTI May $50 puts and April $52 puts were actively traded contracts. An increase in open interest in puts shows that traders favor downside into the expiration months. However, to balance that view in a similar fashion of the sideways price action of Oil, the next two most active WTI options were Dec. $54.50 and $57 calls providing a longer-term Bullish bias.

Friday brought news of another rise in U.S. Oil Rigs. Friday’s rise to 609 was the 7th straight rise, which is not surprising as price stability helps to bring stability to NPV projections bought forward by companies who have mineral rights in cost effective regions.

The price of Oil took a hit this week, but as the trading week ended, it appears like a Bullish Correction despite the largest intra-week decline in two months. A bullish correction typically focuses on a price drop that remains above support with momentum indicators like RSI (5) remaining bullish.

The chart below continues to show the lack of volatility in a multi-month uptrend, which for most Bulls, is just how they want the market behaving. Low volatility in an uptrend is what we have seen for most of the S&P’s historic rise. Therefore, low volatility in and of itself should not be a reason for Bears to jump in and take Oil to or below anticipated price support.

A breakout higher in momentum could push Oil over the coming weeks close or into new price highs for 2017. The breakdown of the price below the Polarity Zone ($50/52) would discourage the Bullish View, but until then, we’ll favor further upside in Crude. 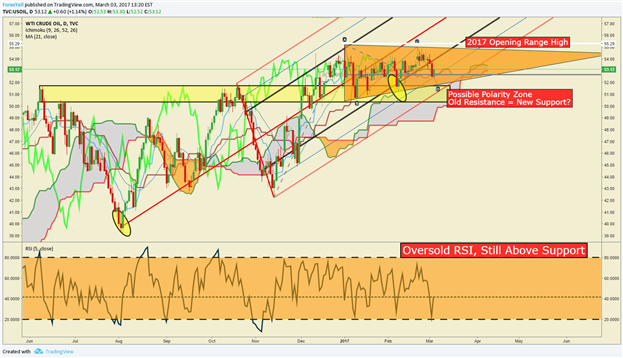 The focal points for the energy market next week will remain Wednesday’s EIA Petroleum Supply Report at 10:30 AM ET and Friday’s Baker-Hughes Rig Count at 1:00 PM ET. In Houston, next week will have Saudi Arabian, Russian energy ministers and CEOs of major oil companies attend CERA week, which can produce energy investment headlines and strategic initiatives.