Crude Oil Price has traded firmly despite a strong dollar after touching 15-month highs earlier this week. The key themes in Oil are a supporting mix of OPEC’s pledge to cut production while U.S. aggregate inventories continue to shrink. Institutional positioning per the CFTC’s Commitment of Trader’s report on Friday afternoon showed Crude positioning remained roughly flat into 2016 highs by raising net long positions by 3,511. In addition to the rising institutional positioning, Baker Hughes Rig Count showed 11 new rigs were activated over the last week, and the trend is not expected to reverse given Wednesday's DoE data.

Gold price remained near 2-week highs despite the US Dollar rising to its highest levels since early February. The best hope for Gold Trader’s would be the recent rise in DXY to give the Fed pause from raising in December, but that is unlikely as the markets are pricing in ~70% chance of a rate hike when the Federal Reserve meets on in December after the uncertainty of the US Election has subsided. One limiting factor that has likely pressured Gold prices is the cutting of net-long positions by institutional investors aggressively as of the CFTC Commitment of Trader’s Report data as of October 18, 2016. This week’s cut of long positions was rather aggressive at -15,601 or ~8% of long positions. 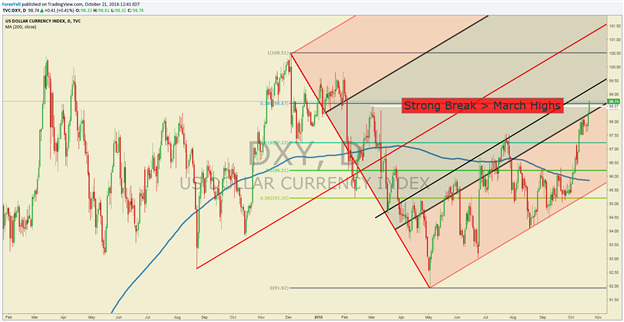 GOLD TECHNICAL ANALYSIS – Gold appears to be in recovery mode after the aggressive drop in the first two weeks of the month. In yesterday’s note, we analyzed the short-term charts to see how Gold had technical pressure aligning with the strength of the US Dollar, which pushed our medium term bias lower.

Bullish signs won’t be taken seriously until we recover resistance of the October 5 high of $1277.16/oz.

CRUDE OIL TECHNICAL ANALYSIS – The price of Crude Oil has remained above the triangle support that we broke away from on Wednesday when price traded at 15-month highs. We continue to trade below the ~$52/bbl level that would initiate the Bullish Head & Shoulder’s pattern that would target ~$78/bbl range. Our confidence in the move higher in recent notes has been based on the technical pattern of a consolidation triangle that tends to precede a breakout. That same triangle will now be watched to act as price support. The support levels from the multi-day triangle consolidation range from $49.70/17 per barrel. Only a break below these levels would turn us from Bullish to neutral.