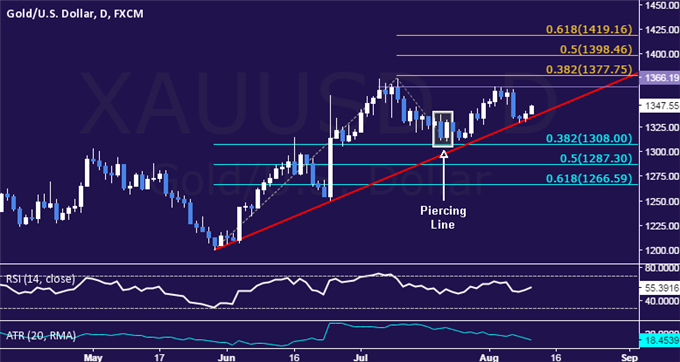 Gold prices maintained a consolidative tone after plunging on Friday in the wake of a better-than-expected US jobs report. The metal is attempting to launch a recovery overnight, finding support in broad-based US Dollar weakness – but a lull in top-tier event risk to offer tangible support for follow-through raises questions about the move’s near-term sustainability.

Crude oil prices failed to maintain near-term follow-through after spiking to at two-week high on news of an informal OPEC meeting upcoming next month. Downside pressure may have been compounded after an inventories estimate from API showed US stockpiles rose 2.09 million barrels. Economists project official EIA data to show a 1.5 million barrel drawdown later today.

Are traders buying or selling gold? Find out here!

GOLD TECHNICAL ANALYSIS – Gold prices are attempting to launch a recovery after finding support at rising trend line set from late May. A daily close above the 38.2% Fibonacci expansion at 1377.75 paves the way for a test of the 50% level at 1398.46. Alternatively, a reversal below the trend line – now at 1335.41 – sees the next downside barrier marked by the 38.2% Fib retracement at 1308.00.

CRUDE OIL TECHNICAL ANALYSIS – Crude oil prices paused to consolidate gains having advanced following the appearance of a bullish Morning Star candlestick pattern. Near-term resistance is in the 43.94-44.40 area (38.2% Fibonacci retracement, support-turned-resistance), with a daily close above that exposing the 50% level at 45.41. Alternatively, a move back below the 23.6% Fib at 42.12 clears the way for a retest of the 14.6% retracement at 40.99. 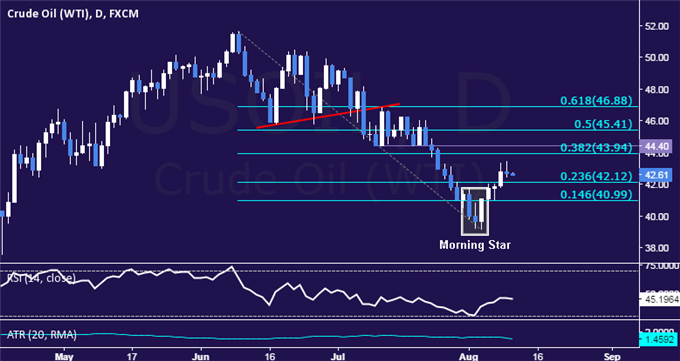