US dollar strength as the Fed started its tightening cycle continues to cap commodity prices. The end of the commodity boom and China’s transition away from manufacturing reflected in another disappointing Caixin Manufacturing Purchasing Manager Index at 48.2. Investors will watch December US Non-farm Payrolls data later this week.

2015 was the second year that crude oil and refined products registered double-digit declines due to a persistent supply glut. A noticeable development late in December was the narrowing of Brent-WTI spread which closed the year at merely 24 cents. This may last through the first few weeks of 2016 as excessive Brent barrels find their way to storage facilities inside the US due to shortage elsewhere.

Reported suggestion by Venezuela’s oil minister for a meeting of oil producers in January could provide some short-lived upside volatility. Gasoline and heating oil also ended the year down 12 percent and 40 percent respectively.

Slowing growth in China continue to hammer prices of industrial metals, prompting cost cuts across the supply chain. December China Caixin PMI came out at 48.2 in contraction zone for the 10th month, lower than 49 expected and 48.6 in November. Copper and metal price rout may prolong while these restructures are happening, as demand remains stagnant in early 2016.

Gold price stays vulnerable after a near 6-year low in December. Upcoming global data and the Fed’s projected rate hikes (albeit a slow path) will hurt non-interest-paying gold in early 2016. Bullion may find some reprieve later in the year when market has fully absorbed the interest rate divergence between US and other G10 countries.

GOLD TECHNICAL ANALYSIS – Gold has stayed within a range since mid-November last year while the market factored in an apparent Fed rate rise. As this absorption process continues in early 2016, the range 1046-1088 likely pertains. Moving averages are flat while momentum signals give early hint of a short-term pickup. Overall, bullion lacks its own momentum therefore will tend to move in line with broader market sentiment. 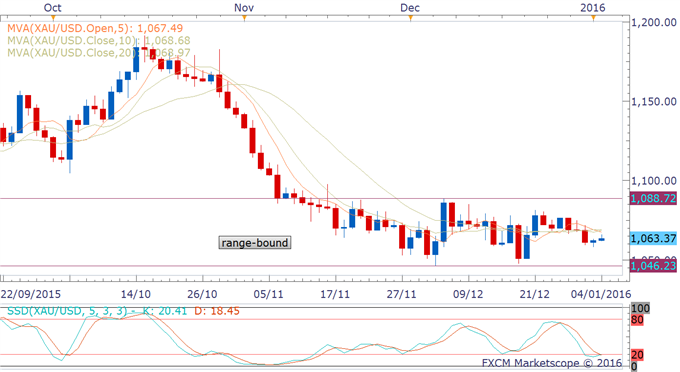 COPPER TECHNICAL ANALYSIS – The slight pick-up in copper price late last year may have exhausted as momentum signals are poised for a downturn. Nevertheless, copper stays range-bound similar to other commodities. Support level comes at 2.000 and resistance level caps prices at 2.2080. Low volatility likely prevails amid thin liquidity in the early days of year 2016. 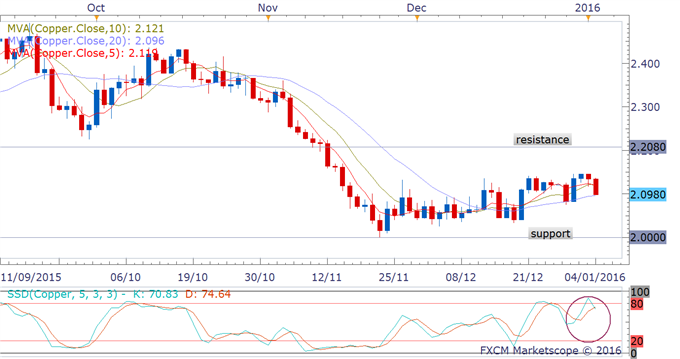 CRUDE OIL TECHNICAL ANALYSIS – Although WTI oil price rose above $35 in late December, it remains vulnerable to downside risks in the coming week. At present, all signals point to range trading below $40 mark. Long term investors could wait for market sentiment to form this week, before picking a side. 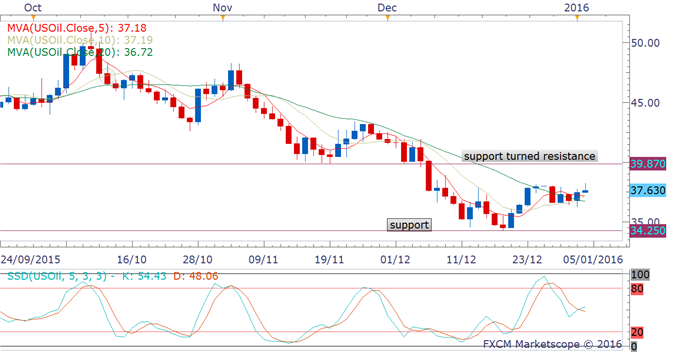