After the Chinese government reaffirmedits support for stock market, the Shanghai Composite closed at a much smaller loss of 1.68 percent yesterday and gained nearly 0.3 percent earlier today. As fears of weaker China demand alleviated, industrial metals and oil advanced. Commodity prices also lifted as the US dollar set on a third day of losses.

Copper was the biggest winner in commodities as signs of supply disruption boosted further gains. These include power shortages in Zambia, protests in Chile and a review of production cut due to price slump by Freeport-McMoRan Inc., the world’s biggest publicly traded copper miner.

Copper gained 1 percent earlier today after a 2.1 percent increase yesterday. Price action has exceeded yesterday’s high and will likely hold on to new levels in the 2.41 area, even with possible intraday consolidation.

Crude oil stayed flat in the morning Asian session after an overnight surge following an American Petroleum Institute’s report that stockpile fell for the week ending Tuesday. On the contrary, the EIA’s weekly report slated for Wednesday is expected to show a second week of increase in inventories. If this materializes, oil prices may see a reversal back to yesterday’s levels, a tad above a three-month support at 47.

Gold stayed flat pending an official statement from the U.S. Federal Reserve after a two-day meeting that may shed light on the timing of interest rate rise. Although 1085 was considered a firm support level, the Perth Mint Treasurer noted in an interview with Bloomberg that the downside still looms for bullion as its role shifted from a safe haven to a zero-yielding asset.

GOLD TECHNICAL ANALYSIS – Gold moved sideways above a firm support level at 1085 with little hint for future direction. At this close to the end of the U.S. Federal Reserve meeting, range trade seems to be the prevalent strategy between support and 1100 mark (a daily high and also 10-day moving average). More directional moves may emerge by tomorrow morning in Asia when the market forms a view and positions accordingly. 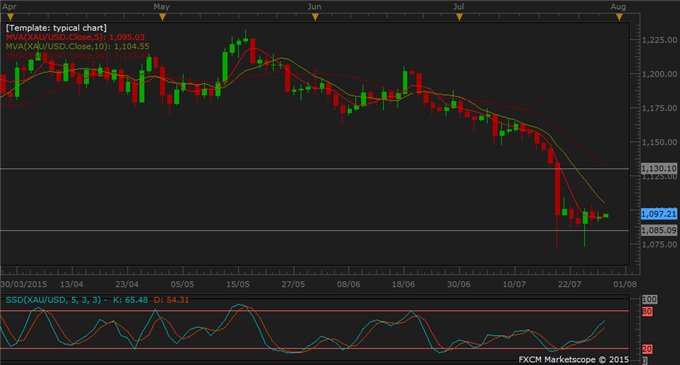 COPPER TECHNICAL ANALYSIS – Copper jumped over yesterday’s band and price action focused on the upside during the Asian morning. Upward momentum signals present, although some intraday consolidations are possible after such a big surge. Prices broke above 10-day moving average and resistance level is now 20-day moving average at 2.487. This is also a critical level to watch out for signs of ongoing correction or a break away from the downtrend. 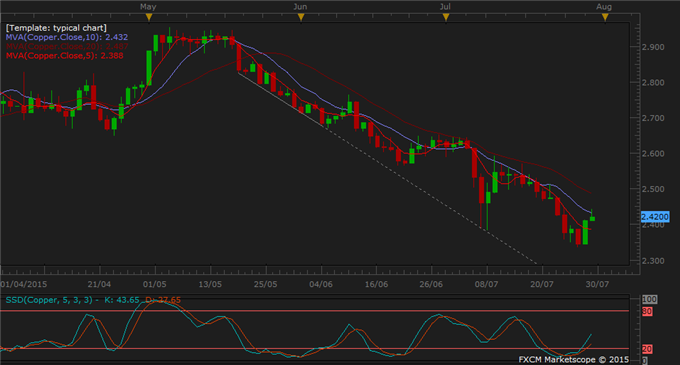 CRUDE OIL TECHNICAL ANALYSIS – Both WTI and Brent oil halted their declines yesterday. Momentum signals are flat with a slight upside bias, indicating a likely consolidation around current price levels above a multi-month support at 47. The oil bears with short positions may watch out for any bounce from this support level to adjust their stop loss. 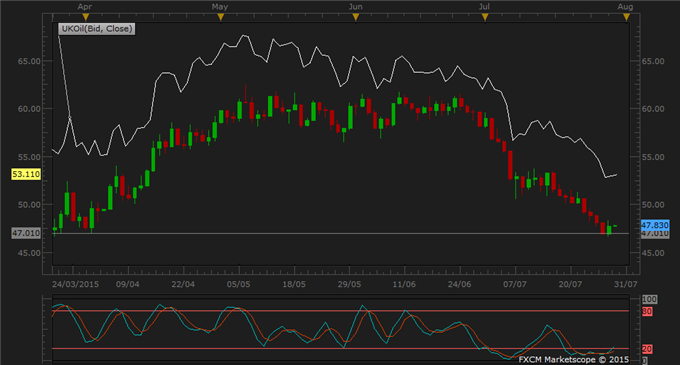