Gold Pares Losses But Downside Looms Ahead of FOMC Meeting

On Friday, Caixin Flash China Manufacturing PMI (previously named HSBC Flash PMI) unexpectedly declined to 48.9 that dragged commodity prices lower. The official NBS PMI is slated for August 1 and the market is braced for further sign of weakness in Chinese economy. A reading below the 50 threshold would indicate contraction in factory, fanning concerns that growth in the second half may miss the 7 percent target and piling more pressure on commodities prices.

The U.S. FOMC meeting on July 28-29 may provide more hint on upcoming interest rate. A Bloomberg survey of economists showed a 50 percent chance of rate hike in September. The US dollar index stayed flat after it reached the highest level since April on Friday, adding to the downside of commodity complex.

Gold cut losses on Monday to find a floor at 1085 after having dropped to its lowest since 2010 on Friday. There is no obstacle to lower moves and the Commodity Futures Trading Commission recorded the highest bearish bets on gold since its data began in 2006. Gold has lost 7.4 percent this year on prospects for higher US interest rate while the US dollar gained. Demand for gold from China and its reserves also missed expectation.

WTI crude oil held losses today after U.S. Baker Hughes rig count showed a third weekly increase on Friday amid a global glut. Meanwhile, gasoline demand and US refinery run rates have been seasonally high in the US summer. As seasonal factor fades in the next several weeks and given US crude export ban, soft US domestic demand will likely exacerbate the supply-demand imbalance, sending prices even lower.

Copper mostly traded sideways after it slid to the lowest since 2009 due to a softer than expected China Manufacturing PMI. The ban of short-selling in Chinese equities has prompted the China bears to short metals and particularly copper as a proxy. Copper remains on a downtrend with likely more short positions added at rallies.

GOLD TECHNICAL ANALYSIS – Gold recorded limited losses today after it crashed below the critical support at 1085 in the previous session. Further test of support is not ruled out, especially on the back of expected volatility around FOMC meeting this week. Downtrend signal has diverted and the bears should exercise caution in case gold prices may form a correction at current levels. COPPER TECHNICAL ANALYSIS – Copper traded above Friday’s six-year low at 2.3517 and will likely be elevated given intraday upward momentum. Downtrend signal persists as seen in daily chart. The bears may look to sell at rallies towards the 2.40-2.43 region. 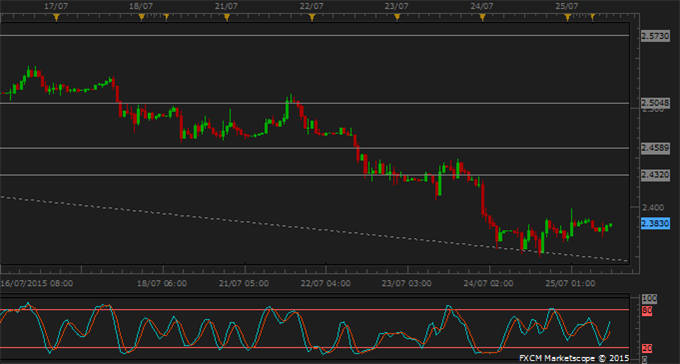 CRUDE OIL TECHNICAL ANALYSIS – WTI oil continued to slide towards April low and a support level at 47. Momentum signal has flattened over the last few sessions hence price action may pause ahead of this support. A break of support would open up the area below that, all the way to March low at 42, and present opportunity to enter short positions. 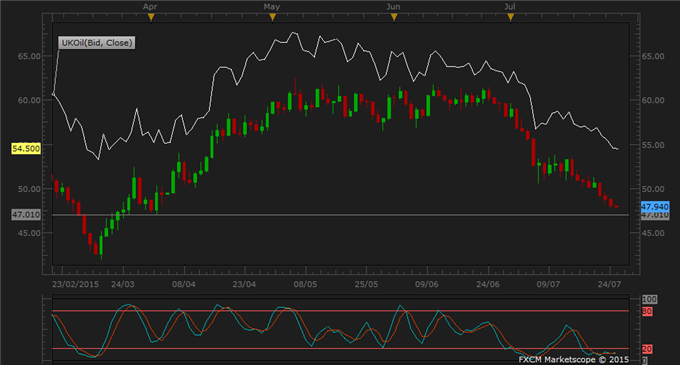