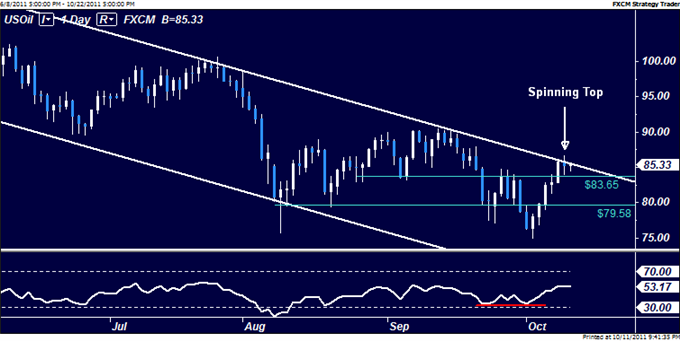 Crude oil remains anchored to broad-based risk sentiment trends, with prices continuing to show a strong correlation with the S&P 500. Futures tracking the benchmark equity index are pointing lower in overnight trade, hinting at the return of risk aversion and threatening to weigh on the WTI contact.

The publication of minutes from September’s Federal Reserve monetary policy meeting headlines the economic calendar. That sit-down produced the unveiling of the balance sheet neutral “Operation Twist” in lieu of another round of quantitative easing (so-called “QE3”) and traders will be keen to gauge the variables that went into that decision. Specifically, markets will be eager to understand what triggers can be set off to bring QE3 back into the policy debate, with any clues pointing to the possibility that such an outcome is possible in the near term likely to prove supportive for risky assets (and vice versa). The unofficial API set of weekly inventory figures is also on tap.

On the earnings front, three S&P 500 companies are due to unveil third-quarter results, with investors likely to pay particular attention to reports from Host Hotels Inc and PepsiCo for readings on the trends in discretionary spending and consumer sentiment as the global economic slowdown continues to play out. Yesterday’s disappointing report from aluminum giant Alcoa Inc has already given investors a taste of things to come, with the company citing a “dramatic” decline in European orders amid uncertainty in the region as a driving catalyst behind its weaker-than-expected headline earnings number.

Sizing up the technical landscape, prices put in a Spinning Top candlestick below resistance at the top of a falling channel set from early May, pointing to ebbing conviction behind bullish momentum and hinting a reversal lower may be ahead. Initial support lines up at $83.65, with a break below that exposing $79.58.

As we discussed in detail yesterday as well as in our weekly gold forecast, the fundamental tipping point for gold prices this week is the release of September’s FOMC meeting minutes. The decision to opt out of QE3 at that meeting weighed heavily on gold prices, undermining the metal’s appeal as an inflation hedge, and traders will analyze the release closely to get a sense for whether another round of asset purchases remains a near-term policy option or if that has been largely abandoned for the foreseeable future.

While Fed Chairman Ben Bernanke suggested the latter scenario was more likely in congressional testimony last week, any clues on just how close the central bank came to opting for QE3 and what could prompt the bank to begin growing its balance sheet anew ought to prove telling nonetheless.

The technical landscape has been little changed for over a week. Prices remain locked in a choppy range between the 14.6% and 38.2% Fibonacci retracements at 1589.14 and 1680.78 respectively. A break below immediate support exposes the September 26 low at 1532.45. Alternatively, a push higher through the range top exposes the 50% Fib at 1726.60. 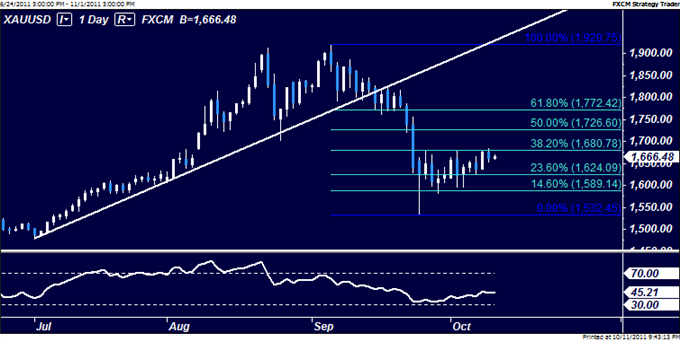 As with gold and the entire precious metal complex, silver is looking toward today’s Federal Reserve’s meeting minutes release to guide price action as prices respond to the perceived need for an alternative store of value implied by the likelihood of a QE3 program in the near term.

Prices continue to tread water above resistance-turned-support at $30.98, the 14.6% Fibonacci extension level, with the next upside barrier marked by the September 27 high at $33.51. Alternatively, a break of support exposes the 23.6% Fib at $29.42. 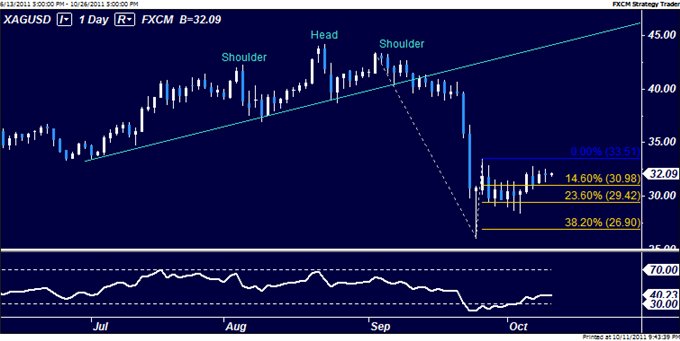