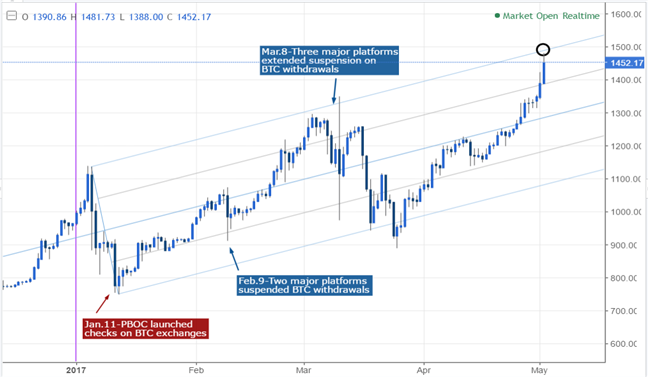 - Bitcoin against the U.S. Dollar soared to a new all-time high, driven by Japanese purchases.

- The CNH/JPY rose back to below the yearly open range low; Chinese Caixin PMI prints could add momentums.

- Read DailyFX latest trading guides for the outlook of the Japanese Yen in the second quarter.

Bitcoin against the U.S. Dollar set a new all-time high on Tuesday, touching 1481.73. This is mostly driven by the increasing demand in Japan according to bitcoinity.

After the Chinese regulator started to crack down illegal transactions through Chinese Bitcoin trading platforms, the ratio of Bitcoin trading volume in China to the world has dropped to 20% in March from more than 90% previously. Then, Japan, overtaking China, becomes the largest Bitcoin trading country by volume.

From a technical point of view, the BTC/USD is currently right below a key resistance level, the top line of a parallel. Traders will want to be aware of a likely retracement around this level.

The offshore Yuan against the Japanese Yen also approaches to a major resistance level. In the mid-March, the pair broke below the open range low of 16.31 and now is back to around this level. 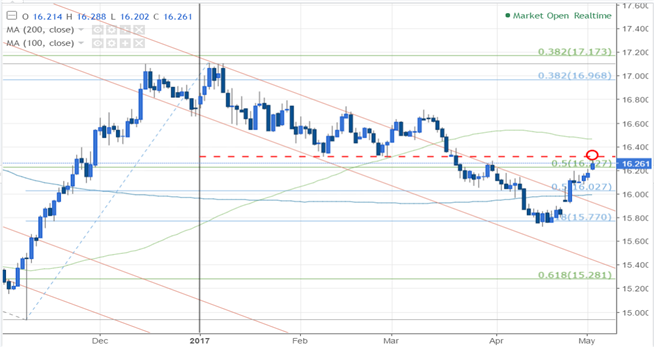 In the coming session, China will release the Caixin PMI prints for April. If those gauges come in to be better than expected, they may add momentum to the CNH/JPY and increase the odds of a breakout. 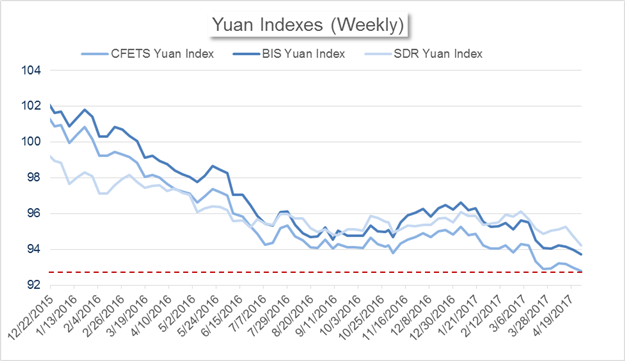 - China’s State-owned Assets Supervision and Administration Commission hosted a conference, requiring steel and coal firms to cut excessive production. The annual target for steel companies in 2017 is to reduce 5.95 million tons of capacity; the target for coal companies is to cut 24.93 million tons of capacity. Amid the pressure on achieving these goals, the profits of Chinese steel and coal producers could drop again.