PBOC Talks Dim the Prospect of Bitcoin in China

- Bitcoin platforms are unlikely to become official exchanges in China.

- Consumption’s contribution to the economic growth dropped in 2016.

- The Chairman of PBOC’s Operations Office Zhou Xuedong told on Monday that price bubbles were seen in Bitcoin; proper regulation on Bitcoin trading is needed in China. He said that the regulator will introduce a series of measures in the effort to strengthen oversight on Bitcoin platforms. Also, Zhou emphasized that current Bitcoin online platforms are platforms only, rather than exchanges. To become an exchange, a platform will need to receive approvals from the securities regulator and even the State Council. However, this is unlikely to happen according to Zhou.

After Bitcoin experienced extreme moves in prices in early January, officials from the PBOC’s Operations Office in Beijing and headquarters in Shanghai began to inspect Chinese Bitcoin trading platforms, including the ‘Big Three’ - BTCChina, OKCoin and Huobi. Zhou, as the Chair of the Beijing Operations Office, is considered to be the leader of these inspections and thus, his comments revealed the prospect of Bitcoin in China from a regulator’s point of view.

The trading volume on the Big Three Chinese Bitcoin platforms used to take up 98% of the entire volume across the world. After the Chinese regulator launched inspections, Chinese trading volume plunged and remains subdued. 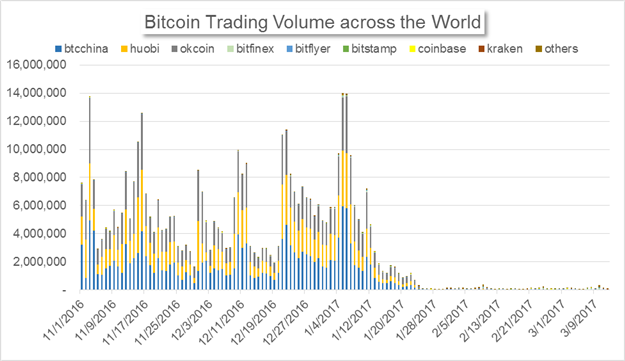 As of March 13th, China’s share in Bitcoin trading by volume dropped to 19% amid extended suspension in Bitcoin withdrawals in all the Big Three platforms. A Hong Kong based platform, Bitfinex, now ranks the first by volume. 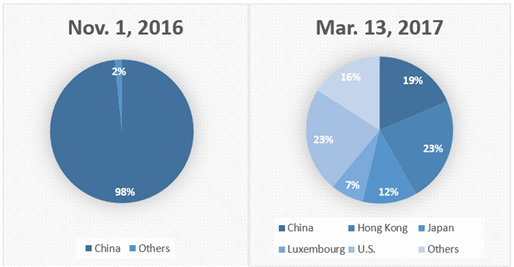 China’s Foreign Minister commented on the China-US relationship in an earlier press conference. Both talks show that China is trying to avoid major trade conflicts with the U.S. According to the Finance Minister, trade-related business has generated over 180 million jobs and taxes from trade contributed to 18% of total taxes income.

The ratio shows that spending has become a major driver to China’s economy. However, the proportion of consumption dropped in 2016 from 66.4% in the previous year. A lack of efficient supply and high costs are major obstacles that the country needs to solve in the effort to develop Chinese potential in spending.