- China’s investment conditions improved in September, with a 2.5% growth in private investment.

- Both sales and investment in real estate picked up in September, increasing the risk of price bubbles.

- The PBOC weakened the Yuan by -23 pips against the U.S. Dollar to 6.7362 on Thursday. Following the release of the Yuan fix, the offshore Yuan strengthened against the Dollar and rose to the strongest level in three days, with the USD/CNH dipping 6.7375. This is likely because the offshore Yuan was trading below the guided level despite the drop in the fix. Forty five minutes later, China’s 3Q GDP print came in, showing a steady growth of 6.7%, in line with estimates. In an immediate response to the GDP read, the offshore Yuan fell against the Dollar. By the time this report was written, the Yuan recovered with the USD/CNH retracing around 6.7410. 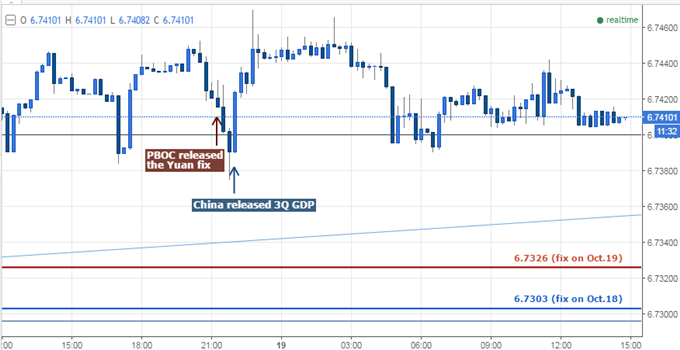 The investment prints are consistent with the money supply reads released yesterday. The gap between the growth in M1 and M2 has narrowed to 13.2% in September, indicating companies and individuals are spending more.

However, it may be too soon to say that Chinese companies’ investment has recovered, as the growth rates remained at relative low levels. Regulators are more likely to wait a bit longer in hopes of seeing more improvement in investment before make major changes in either monetary policy or fiscal policy.

Chinese housing markets have been in the spotlight over the past two months, amid soaring prices. According to a report released by China’s Statistics Bureau yesterday, both sales and investment in real estate saw increases once again in September: The sales of commercial buildings expanded +41.3% on an annualized basis and the investment in real estate rose +5.8%, despite that Chinese central and local governments have been introducing tightened rules on property purchases. 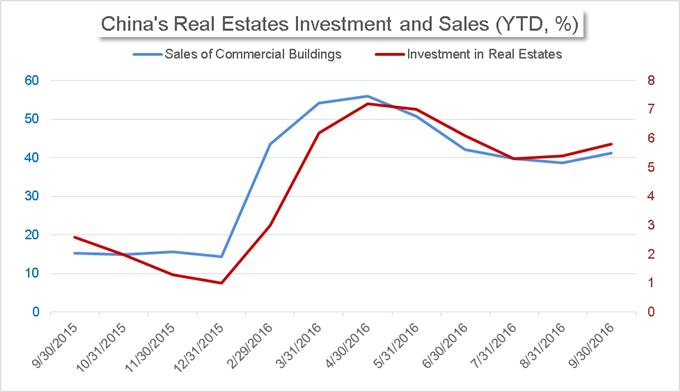 After Chinese stock markets tumbled in January, many Chinese investors, especially individual investors, shifted their focuses to real estate, as stocks and properties are the two main investment vehicles for Chinese households. Also, in December 2015, the country released five key tasks in 2016, including to reduce home inventory. Both have contributed to rises in the housing market. The uneven development between big cities (tier-1 and 2) and small cities (tier-3 and 4) posed a dilemma for regulators to issue nationwide policies. Therefore, local governments have stepped in and introduced regulations targeting at the local regions.

- Officials from the PBOC Shanghai Branch hosted a meeting with executives from 25 commercial banks as well as officials from Ministry of Housing and Ministry of Land and Resources regarding tightening regulation over the local housing market. PBOC officials demand commercial banks to strictly follow rules of loan issuance and strengthen background check on mortgage applications.