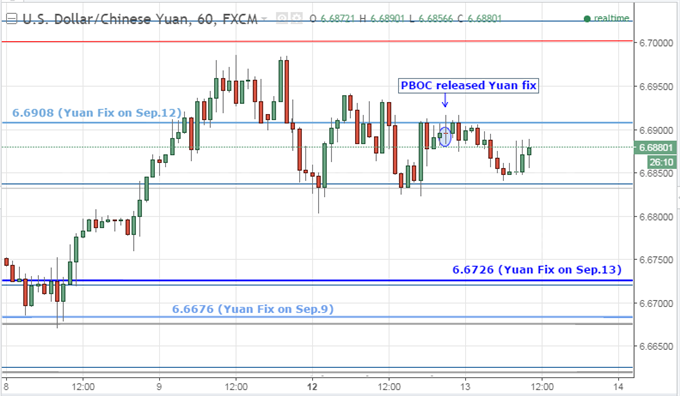 - The offshore USD/CNH retraces within a range despite of a stronger fix set by the PBOC.

- China’s total investment and private investment continued to grow at the slowest pace on record.

- The central government’s business tax income in the first seven months came in at 30 times more than planned.

- The PBOC guided the Yuan higher by +182 pips or +0.27% against the U.S. Dollar to 6.6726 on September 13th. We can see from the 1-hour chat that a Doji candle formed following the release of the Yuan fix. This indicates indecision from traders despite of the Central Bank’s guidance. The PBOC appears to want to keep the Dollar/Yuan below the psychological level of 6.70. At the same time, the US Dollar has been extremely volatile since last Friday’s comments from Boston Fed President Rosengren who is also a FOMC voting member. With mixed moves from the two central banks, the USD/CNH is retracing within a range between 6.6832 and 6.6982.

China’s national statistics bureau reports cumulative growth rates (year-to-date) for fixed assets gauges, such as January-August, rather than individual values for a month, such as August. 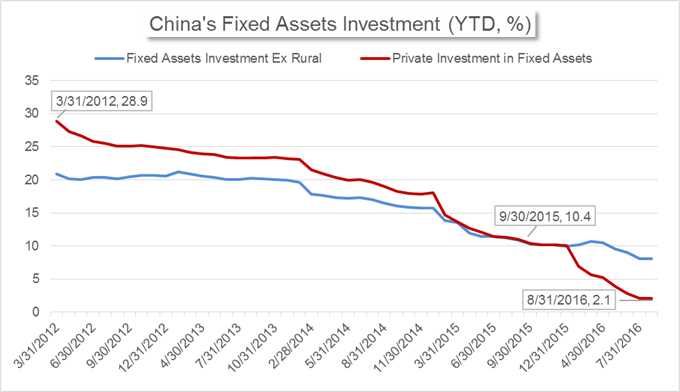 Take a look at a longer time frame: the growth rate of the total investment has dropped to the lowest level since 1999. 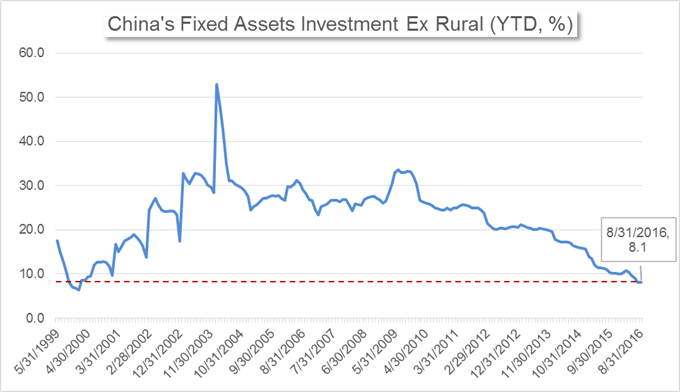 As we discussed earlier, the slow growth was mainly led by lacking investment opportunities rather than shortage in funds. Therefore, additional easing measures from the Central Bank may not help much; it will be more useful to provide investment opportunities to private sectors. That is why the Chinese government have been promoting the Public-Private-Partnership (PPP) model and encouraging private firms to participate in projects announced at the 13th Fifth plenum.