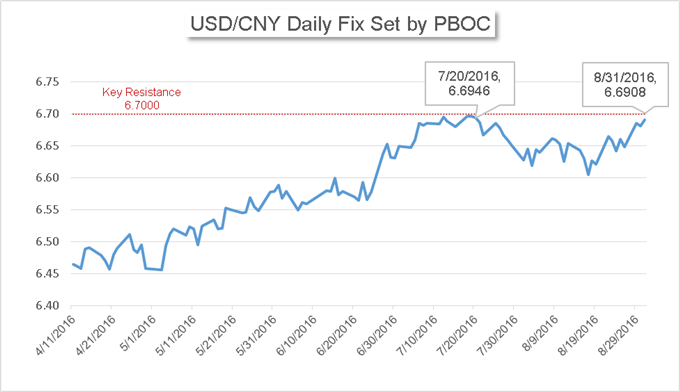 - The PBOC fixed the Yuan to the weakest level in a month, though it still above key support level.

- The yield of Chinese 10-year government bonds is picking up amid the PBOC’s guidance and increasing speculation on Fed rate hikes.

- The PBOC lowered the Dollar/Yuan fix to 6.6908 on Wednesday, the weakest level since July 20th; yet, the level is still below key resistance of 6.7000, indicating the Central Bank has not yet agreed with a breakout above such level.

- Chinese government bonds continue to consolidate amid the PBOC’s guidance and increasing speculation on Yuan weakness driven by potential Fed rate hike. After the yield of 10-year Chinese government bond hit the lowest level since the end of 2008 on August 15th, the PBOC restarted the 14-day reverse repos program. The tool is expected to curb the cheap short-term borrowing that has been used to purchase longer-term bonds, such as 10-year government bonds. 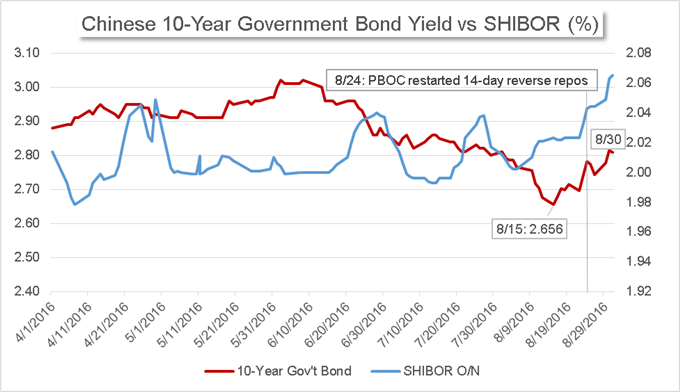 The introduction of the 14-day reverse repos immediately brought up short-term borrowing rate (SHIBOR O/N) but not the longer term rate - Chinese government 10-year bond yield, as the efficiency of Chinese monetary policy has been seen as reducing. After the PBOC continued to inject 14-day reverse repos for a week and discussions on Fed rate hike heat up once again, the yield of Chinese 10-year government bond began to pick up this week and hit the highest level in a month on August 30th.

- The profits of Chinese companies listed on the A-shares market dropped by -4.17% in the second quarter according to their semi-annual reports; the decline also widened from a drop of -0.95% in the first quarter of 2016. Also, a new trend seen from the reports is that the return on equity (ROE) of non-state-owned companies has surpassed ROE of state-owned enterprises (SOE). One of the main reasons is that private companies which are generally smaller than the SOEs are more market-driven and flexible to change under a slowing economy. SOEs are facing relatively larger debt-to-asset ratios, which dragged down their profitability as well.