The S&P 500 put in a fresh record-high close on Thursday after a stronger-than-expected manufacturing report from the Institute of Supply Management (ISM) injected bullish energy into equity markets. US manufacturers, according to the report, are being overrun with heavy demand, indicated by a sharp swing higher in new orders. The benchmark S&P 500 index closed just shy of 4,020 after rising 1.18% on the day.

Technology stocks also rose strongly into the extended US holiday weekend, with the Nasdaq 100 index recording a 1.82% rally. Elsewhere, the small-cap Russell 2000 index gained 1.50%, while the Dow Jones Industrial Average (DJIA) climbed 0.52%. The US Dollar weakened against most major G10 peer currencies.

Thursday marked the end of the trading week for the United States, with stock markets set to reopen on Monday following the Easter holiday. Bond markets, however, will see a shortened trading day on Friday. Speaking of bond markets, Treasuries saw buying across most tenures except the 2-year. The benchmark 10-year yield fell 4.15%.

The US government bond market recorded its worst loss in years, particularly in long-dated Treasuries. The iShares 20+ Year Treasury Bond ETF – composed of bonds with a maturity over 20 years – saw a violent 14.83% decline in the first quarter. The roiled Treasury market will likely remain in focus going forward as investors remain doubtful that the Fed won’t prematurely raise rates amid a stimulus-fueled domestic economy that continues to heat up. 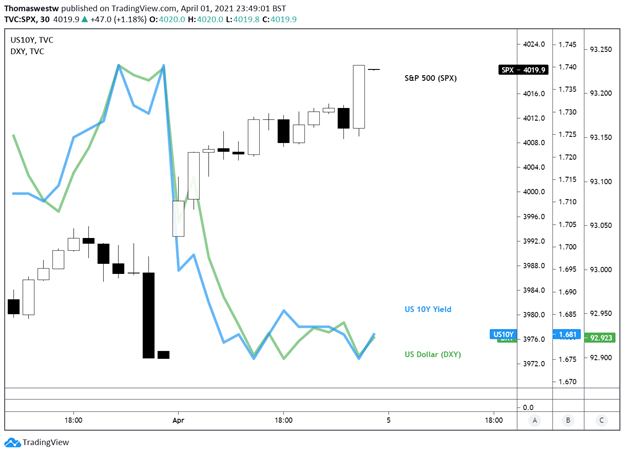 The Asia-Pacific session is set to be a bit quieter than usual with closed markets in Australia and New Zealand for the Good Friday holiday. Australia’s ASX 200 gained 0.56% on Thursday to kick off the second quarter. Equity markets across the rest of the APAC region also gained. Market sentiment received a boost after US President Joe Biden outlined his infrastructure plan early Thursday when the US leader called for a $2.25 trillion investment in roads, bridges, airports, and green energy infrastructure.

The Australian Dollar is moving higher on broader Greenback weakness. AUD/USD initially was moving lower on Thursday, threatening to break below a key support level from a Head and Shoulders pattern, but subsequently shifted higher later in the session. The move higher comes despite a worse-than-expected trade report out of Australia that showed weakness in exports.

Friday’s economic event calendar is void of high- and medium-impact events, according to the DailyFX Economic Calendar. Thailand will see business confidence and unemployment data cross the wires, while India will release its foreign exchange reserves for the week ending March 26. While US markets are closed tomorrow, traders will have a close eye on the highly-anticipated non-farm payrolls report, with the consensus estimate slated to print at 647k, which would nearly double the prior month’s figure.

The S&P 500’s break above the 4,000 level saw prices rise above the upper trendline of a Rising Wedge pattern. While technically a bearish pattern, the break above resistance highlights the underlying strength in US markets. And now, with a full retracement of the last leg lower, the 161.8% Fibonacci retracement shifts into view at the 4,064 level.

Alternatively, a move back into the wedge could be viewed as a bearish development. However, given the broader trend higher, any pullback will likely be transitory. The Relative Strength Index (RSI) is showing some bearish divergence, although the MACD oscillator is trending higher, pointing to healthy momentum. 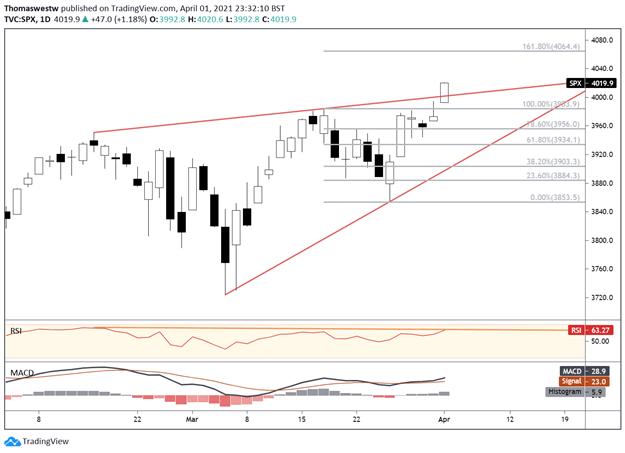