Wall Street traders continued to pile into technology stocks on Thursday, boosting the Nasdaq Composite 0.55% into another record high close. The Dow Jones and S&P 500 were little changed on the day. Meanwhile, the small-cap Russell 2000 index dropped 0.89%, coming off yesterday’s record high. The US Dollar weakened against most major peers.

The 10-year Treasury yield rose 13 basis points after several days of declines pushed yields to multi-week lows, as the market ignored concerning US labor data and instead focused on increased debt supply prospects. The US weekly jobless claims report crossed the wires at 900k for the week ending January 16, according to the DailyFX Economic Calendar. The jobs data has investors concerned that the US labor market recovery may be plateauing. 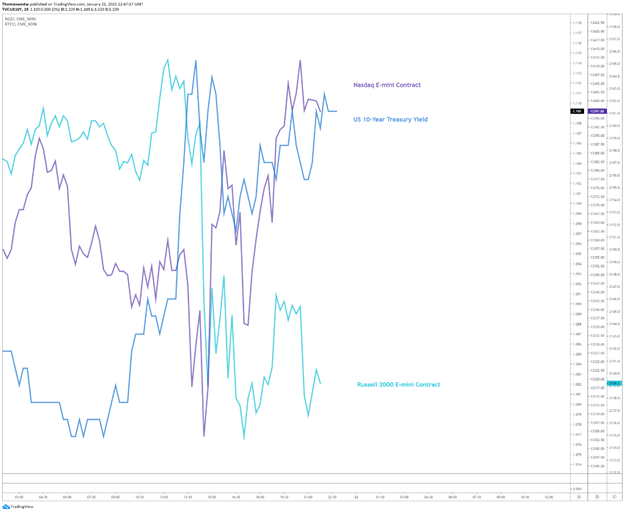 Asia-Pacific trading may see the recent risk-on mood start to sour into the weekend. Hong Kong’s Hang Seng Index may fall at open, as indicated by futures, along with Japan’s Nikkei 225 index. The pullback follows an upbeat week across most APAC markets as investors cheered on global developments, mainly increased stimulus hopes in the United States.

Economic data out of New Zealand is pushing the Kiwi higher after quarterly inflation data beat analysts’ expectations. According to the DailyFX Economic Calendar, Q4 inflation rose 1.4% on a year-over-year basis. The inflation print is among the latest signs that the New Zealand economy is undergoing a robust recovery following the Covid-19 pandemic, which has been virtually eliminated in the country.

The Kiwi rose against most of its major peers as bets for further easing from the RBNZ were tempered. According to the New Zealand government, the gain in inflation during the fourth quarter was driven largely by transportation, recreation, culture, and housing. Westpac Bank, earlier this week, adjusted its forecast and now expects the RBNZ to keep its official cash rate (OCR) at 0.25%. 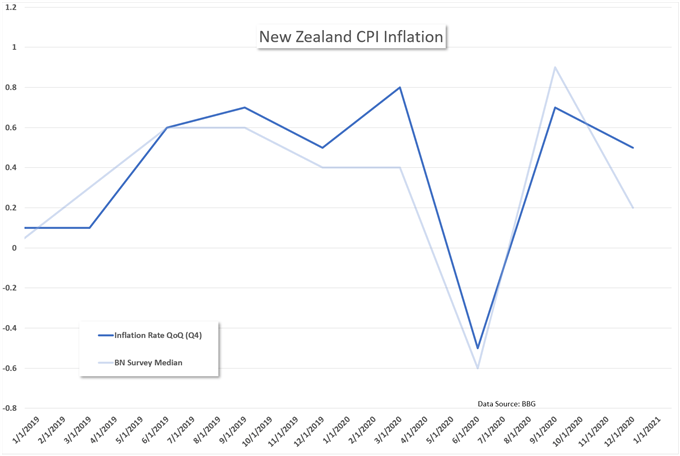 The New Zealand Dollar’s move higher against the Greenback sent NZD/USD back above its 0.7200 psychological level and the 38.2% Fibonacci retracement from the December to January move. The move may see further upside with the Relative Strength Index (RSI) and MACD oscillators both giving bullish signals.

A level of prior resistance near 0.7240 may come into play before the 23.6% Fib level comes into focus. To the downside, the 0.7200 psychological level, 38.2% Fib, and 9-period Exponential Moving Average may likely serve as areas of support. Overall, however, when looking at the longer-term trend, NZD/USD’s future price action appears biased towards higher ground. 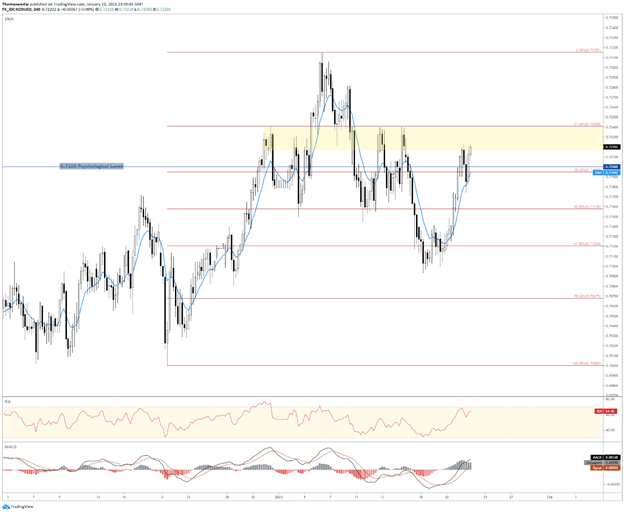