Dollar May Turn Higher After US Election Outcome Applies Pressure

The US Dollar is digesting recent losses at the weekly trading open. Price action seems relatively staid in the wake of confirmation over the weekend that former Vice President and Democratic nominee Joe Biden has prevailed over Republican incumbent Donald Trump in last week’s presidential election.

That Mr Biden would emerge victorious was foreshadowed by the polls and to some extent priced in ahead of election day. Risk appetite firmed as the results poured in and appeared to confirm the likelihood of an as-expected outcome, sapping haven demand for the Greenback.

US DOLLAR MAY TURN HIGHER AFTER ELECTION OUTCOME IS DIGESTED

Follow-through now looks to be ebbing, as expected. That may set the stage for the benchmark currency to turn upward as markets ponder the implications of a turn away from dovish extremes on the Fed policy outlook in the wake of the election and following last week’s hands-off tone from the FOMC.

While tightening is still nowhere in sight, the path for benchmark interest rates next year implied in Fed Funds futures has noticeably steepened. The slope of the yield curve has followed suit. This may suggest that after the latest bout of pro-risk USD selling runs its course, the currency may reclaim rates-based support. 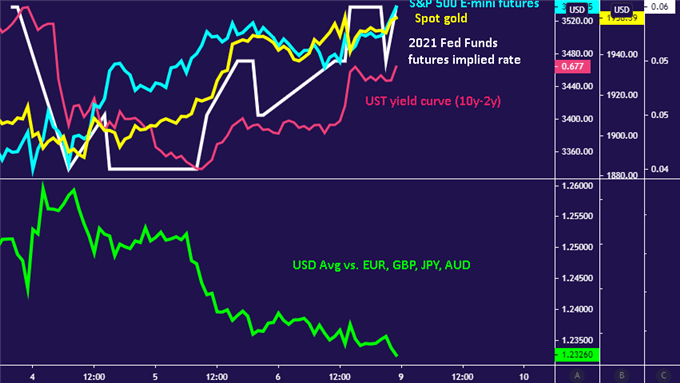 Looking out to Monday’s trading session, a relatively thin offering on the economic calendar looks likely to keep broader sentiment trends at the forefront. Asia-Pacific bourses are tracking cautiously higher and bellwether S&P 500 futures are pointing to more of the same ahead.

This speaks to a risk-on tilt that might favor cyclical currencies like the Australian, Canadian and New Zealand Dollars at the expense of anti-risk alternatives like USD and JPY. The Trump campaign is yet to concede however and may still try to fight the election’s outcome, sending a chill down investors’ spine.

The Bank of Japan Summary of Opinions from October’s policy meeting came and went without incident. The report repeated familiar platitudes, stressing vigilance about the suitability of the stimulus mix and prolonged periods of negative price growth, but offered little actionable news for markets to trade on.