Euro Fell, US Dollar May Rise if Asia Stocks Look Past Wall Street

The Euro was one of the worst-performing G10 currencies on Wednesday. EUR/USD sold off ahead of today’s summit between European Union leaders where members will be discussing the next steps in handling the coronavirus pandemic. In particular, there may have been some pessimism over a US$2.2 trillion plan to support regional economic growth.

This window of opportunity allowed the haven-linked US Dollar to trim most of its losses during a relatively optimistic day in global equities. The S&P 500 and Dow Jones closed 2.29% and 1.99% to the upside respectively, bringing a halt to two days of consecutive losses. This upbeat mood benefited the growth-linked Australian Dollar while also boosting the similarly-behaving New Zealand Dollar.

Investors may have been intrigued by comments from US Treasury Secretary Steven Mnuchin who hinted that most of the economy could open up “by the time we get later in the summer”. A stabilization in crude oil prices – after a substantial collapse in energy prices - may have also helped to curb downside momentum in stocks over the past 24 hours.

During the final hour of trading on Wall Street, there was a notable pullback in equities that have left S&P 500 futures pointing cautiously lower heading into Thursday’s Asia Pacific trading session. There may still be some hesitation from traders to commit to a broadly upbeat tone during the earnings season. In afterhours trade, Alcoa suspended its outlook for aluminum this year. This is as CSX withdrew its forecast.

Another relatively lackluster economic data docket places the focus for foreign exchange markets on risk trends. If regional equities like the Nikkei 225 or ASX 200 struggle following Wall Street higher, we may see the US Dollar extend gains. This may also see traders attempting to buy into near term equity declines which from a contrarian standpoint can signal a resumption in risk aversion.

From a technical perspective, EUR/USD may extend losses down the road as falling resistance from last month’s top guides the pair lower. The Euro also took out rising support from late March – blue line below – and seems to be eyeing the next barrier below at 1.0777. A turn higher and push through falling resistance may open the door to testing current April highs. 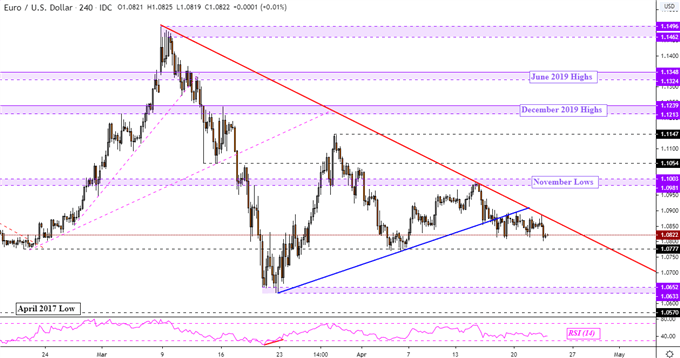