The haven-linked US Dollar and Japanese Yen were some of the best-performing major currencies on Tuesday amid a second consecutive down day on Wall Street. The Dow Jones and S&P 500 declined -2.67% and -3.07% respectively as crude oil prices continued to see remarkable selling pressure. Meanwhile the growth-linked Australian Dollar and similarly-behaving New Zealand Dollar weakened.

Turmoil in energy markets may have greatly contributed to the risk aversion. During European trade, the price of WTI crude – the June contract – tumbled as much as 70% after the May contract turned negative in the prior session. The slump in the commodity may highlight the underlying concerns over demand despite several nations outlining the case for an easing in social distancing measures amid the coronavirus outbreak.

Italy anticipates to “gradually ease” lockdowns from May 4. Meanwhile in Singapore, the government announced that most workplaces will remain closed until June 1. In the United States, New York State had its 6th decline in daily virus cases. Elsewhere, Texas confirmed reports jumped 5.7 percent in the largest gain since April 10.

The markets struggled to find much upside progress on hopes of a $484 billion interim stimulus plan for small businesses and hospitals. The Senate passed the bill today and the House is expected to follow up on it later this week. Netflix shares temporarily soared 7.87% in afterhours on a rosy earnings report, but the stock gave up most of that progress. Information technology was the worst-performing sector on Wall Street Tuesday.

A lack of critical economic data during the Asia Pacific trading session places the focus for currencies on market mood. To that end, we may see equities follow Wall Street lower. That may boost the US Dollar at the expense of the Australian Dollar. The interim US stimulus bill could somewhat cap downside pressure in stocks, but the disappointing earnings season could reinstate selling bets down the road.

The US Dollar may extend gains after my majors-based USD index found follow-through after pushing above descending resistance from last month’s top. The index averages USD against EUR, JPY, GBP and AUD. Prices have also pushed above the 1.3510 resistance barrier which has exposed current April peaks. The latter may stall near term buying pressure. 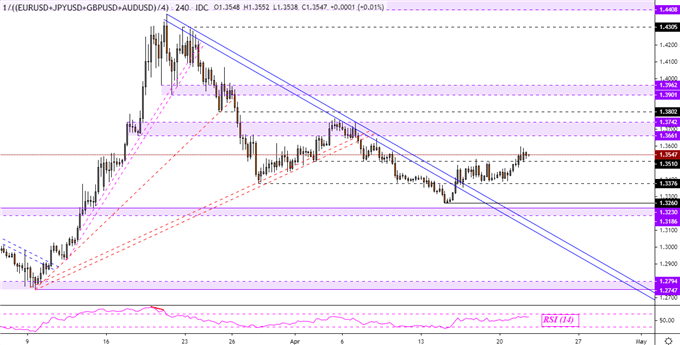