The anti-risk Japanese Yen was the best-performing major currency on Tuesday as Wall Street was unable to extend the rosy session in European equities. Despite the Federal Reserve delivering an emergency off-meeting 50-bp rate cut, the S&P 500, Dow Jones and Nasdaq closed -2.81%, -2.94% and -2.99% lower respectively. That brought the target range for the Federal Funds Rate to 1.00% to 1.25% from 1.50%-1.75%.

This also followed the G-7 finance ministers and central bank governors meeting where leaders pledged to take action where needed amid the coronavirus outbreak. Sentiment-linked crude oil prices also turned lower after yesterday’s rebound, weighing against the Canadian Dollar. Later today is the Bank of Canada (BoC) rate decision at 15:00 GMT and the markets are just about looking for similar aggressive easing efforts.

Recommended by Daniel Dubrovsky
New to forex? Check out our guide!
Get My Guide

The Canadian Dollar was the worst-performing major. Overnight index swaps are fully baking in one 25-bp rate cut from the BoC with odds of another on top of that at 70%. That means taking benchmark lending rates to 1.50% from 1.75% won’t be enough to satisfy dovish expectations. That risks elevating volatility in the Canadian Dollar over the next 24 hours.

The US Dollar continued to underperform despite its haven-linked status. The markets continued to focus on its eroding yield advantage with the local 10-year government bond yield dipping below 1% for the first time on record. The Euro thus continued its rally against the USD, with EUR/USD extending its aggressive uptrend – as expected. Rising bets of an RBNZ rate cut pushed AUD/NZD higher, as anticipated.

Front and center for Wednesday’s Asia Pacific trading session is fourth-quarter Australian GDP data. However, AUD/USD may look past the outcome as the figures are largely from before the outbreak of the coronavirus. Rather, the Australian Dollar may focus more on Caixin China PMI data due at 1:45 GMT. If these follow the recent dismal official PMI outcomes, AUD/USD risks extending its decline.

How will AU GDP data drive the Australian Dollar?
What Do Other Traders' Buy/Sell Bets Say About Price Trends?
Register for webinar
Join now
Webinar has ended

China is Australia’s largest trading partner and economic weakness from the latter can imply negative knock-on effects. S&P 500 futures are pointing lower heading into the session which could induce more “risk-off” trade. That may continue pushing the Japanese Yen higher against its major counterparts, particularly following bullish technical signals in my majors-based Yen index.

USD/JPY extended its selloff, tumbling below key rising support from August. Now the pair faces the next psychological barrier between 106.48 to 106.84. Further downside progress would expose lows from August in its near-term downtrend.

How can sentiment impact market trends?
What Do Other Traders' Buy/Sell Bets Say About Price Trends?
Register for webinar
Join now
Webinar has ended 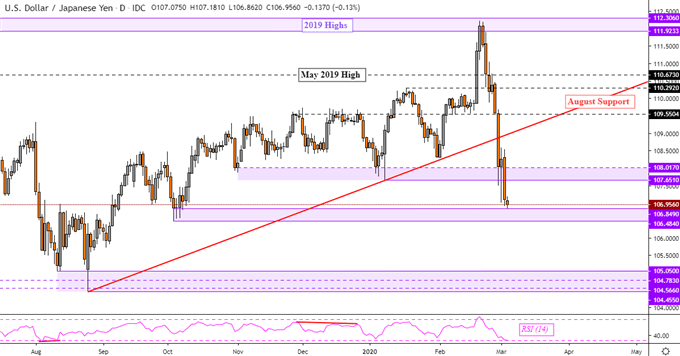