The US Dollar initially soared on the latest local jobs report which offered mixed signals about the labor market. While the economy added fewer nonfarm payrolls than expected (136k versus 145k), the unemployment rate unexpectedly ticked down to 3.5 percent in September from 3.7. That was the lowest outcome in over 50 years.

Despite the latter, average hourly earnings clocked in at 2.9 percent y/y versus 3.2 expected. That was the slowest pace of wage growth in over a year and continues to undermine the tightness of the labor market and the Philips Curve. The latter is a simple economic model that depicts the inverse relationship between unemployment rates and wage growth.

The data was enough to cool October Fed rate cut bets, but not enough to fuel concerns about the health of the US economy after dismal manufacturing PMI data. The S&P 500 soared as it climbed 1.42 percent. The pickup in risk appetite eventually worked against the US Dollar as it ended the day little changed. This fueled gains in the sentiment-linked Australian and New Zealand Dollars as the anti-risk Japanese Yen fell.

A relatively quiet economic docket in Monday Asia Pacific trade places the focus for foreign exchange markets on risk trends. As such, the Nikkei 225 and ASX 200 could follow the rosy performance from Friday’s Wall Street trading session. That may boost the New Zealand Dollar at the expense of the Japanese Yen. But, given the continuation of US-China trade talks at the end of this week, follow-through may have to wait.

This leaves the New Zealand Dollar in an interesting spot. On a daily chart, NZD/USD closed on the falling channel of resistance from July. Confirming a reversal of the dominant downtrend would arguably entail closing above near-term resistance at 0.6349. Otherwise, resuming declines would place the focus on near-term support which is a range between 0.6197 and 0.6245.

Meanwhile, as of the IG Client Sentiment report from October 4, retail trader data showed that 74.50 percent of NZD/USD traders are net-long. Recent changes in sentiment warn that the current NZD/USD price trend may soon reverse higher despite the fact traders remain net-long. To learn more, join me every week on Wednesdays at 00:00 GMT as I uncover what market positioning is saying about recent trends in forex. 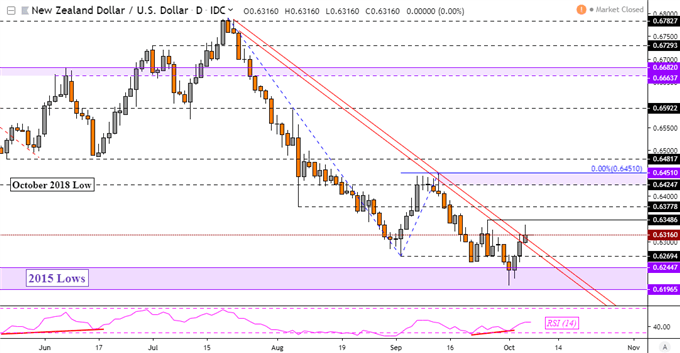