The Canadian Dollar was the worst-performing major currency on Wednesday, tracking a similar decline in sentiment-linked crude oil prices as risk aversion engulfed financial markets again. The source of pessimism could be traced back to yesterday’s US trading session where local ISM Manufacturing PMI data showed the largest contraction in industrial activity since 2009.

Then over the past 24 hours, the World Trade Organization (after a 15-year long inquiry) ruled that the United States could retaliate against EU subsidies on local aircraft maker Airbus. This could come down to tariffs of up to $7.5b on exports from the European Union. Hours later, US President Donald Trump mentioned that the ruling was a “big win” for the United States.

European stocks took a big hit as the Euro Stoxx 50 and Dax fell 2.98 and 2.76 percent respectively. With the US and China already in an ongoing trade war - which has dented global manufacturing and business confidence – another front that opens up across the Atlantic could further pressure already-fragile global growth. It is no surprise that this risk aversion extended into Wall Street as the S&P 500 fell 1.79%.

Since crude oil is a key source of revenue in Canada, the decline in the commodity added further pressure on the Loonie. Meanwhile, the anti-risk Japanese Yen outperformed. The highly-liquid US Dollar on the other hand was little changed. It was weighed down by rising bets of another 25bp rate cut from the Federal Reserve at the end of this month. Those odds have now climbed to about 73.4 percent.

With that in mind, we may see Asia Pacific benchmark stock indexes follow Wall Street lower, prolonging risk aversion in financial markets. This may weigh against the pro-risk Australian Dollar, which will also be watching local trade balance data. If sentiment sours, the anti-risk Japanese Yen may extend its rise from the previous 24 hours.

Against the US Dollar, the Canadian Dollar suffered its worst loss in over 7 months, depreciating about 0.8 percent. This has translated into USD/CAD taking out near-term resistance at 1.3310. This has exposed the next critical psychological barrier between 1.3339 and 1.3383. If that area is taken out, that may translate into a dominant uptrend towards May highs. 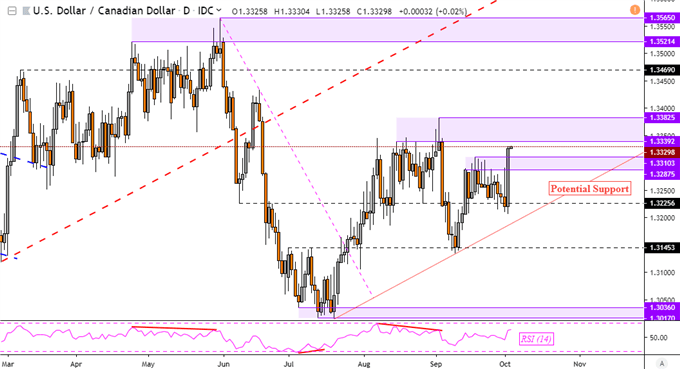