Wednesday’s testimony from Fed Chair Jerome Powell and the FOMC meeting minutes helped rekindle aggressive easing bets which boosted equities at the expense of the US Dollar. A couple of concerns to the central bank’s outlook included uncertainties such as trade wars and muted inflationary pressures. In fact, during his second day of testimony to Congress yesterday, Mr Powell continued fretting about the latter.

Namely, he noted that the jobless-inflation links are “weaker and weaker”, referring to the seemingly diminishing relevance of the Philips Curve. It is an economic model that outlines the potential inverse relationship between unemployment and the rate of inflation. In short, a tighter labor market with fewer available workers for hire should help push up wages which ought to lead to higher prices.

Well, markets were suddenly awoken when the latest US CPI report crossed the wires and beat expectations. Excluding food and energy, prices rose 2.1% y/y in June versus 2.0% expected and prior. While the headline rate dropped down to 1.6% from 1.8% as anticipated, both the month-over-month readings unexpectedly surprised to the upside. This counters the trend of US economic data tending to disappoint as of late.

Taking a look at the chart below, we can see that the US Dollar proceeded to soar alongside rising local government bond yields. Yet, this only worked to diminish bets of a 50bps rate cut from the Fed at this month’s interest rate decision. Odds of just one are still fully priced in by markets. The Greenback did end the day little changed due to losses during the first half of the day, but anti-fiat gold prices suffered. 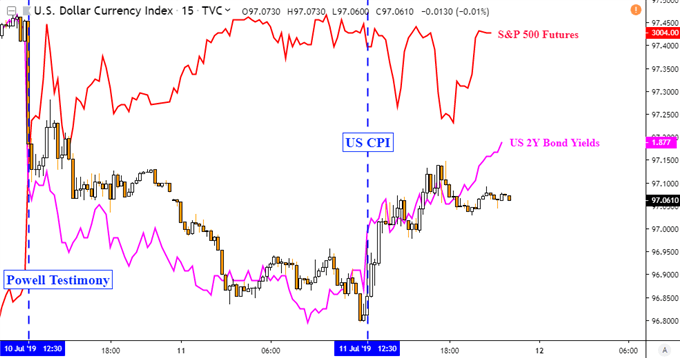 The S&P 500 wobbled as its path to the upside these past 24 hours was a roller-coaster ride. Momentum to the upside is still fading and this could precede a turn lower. S&P 500 futures are little changed heading into the remainder of the week, hinting at a mixed start for Friday’s Asia Pacific trading session. Risks to the outlook for sentiment include the US escalating trade tensions with Europe and India.

In addition, US President Donald Trump reminded markets that the US-China trade truce should not be taken for granted. He said that China is “letting us down not buying agricultural products” on Thursday. Speaking of the world’s second-largest economy, at an unspecified time today, China is going to release June’s trade report which the Australian Dollar could be closely watching.