Not sure where equities are heading next? We recently released the third quarter equities fundamental and technical forecast !

The US Dollar extended gains from Friday in a relatively quiet trading session during the beginning of this week. The bulk of economic event risk for the currency is due later on with items such as a testimony from Fed Chair Jerome Powell and the minutes of the June FOMC meeting due to cross the wires later this week. As such, markets likely echoed on recent fundamental developments.

One of those was last week’s solid US jobs report, which resulted in the markets pricing out chances of a 50 basis point cut this month. Over the past 24 hours, we saw local front-end government bond yields rally and the S&P 500 decline as it ended the day 0.48% to the downside. This reflected the cautious cooling in bets of loser credit conditions from the United States as sentiment soured despite a US-China trade truce.

While this contributed to the sour mood on Wall Street, Apple shares were left particularily vulnerable after Rosenblatt Securities downgraded the stock to a “sell” from “neutral”. Prior to market open, the research and investment brokerage firm did so on expectations of a “fundamental deterioration” in the next six to twelve months. Apple shares gapped 1.67% to the downside at open, compared to -0.35% for the S&P 500.

The drop in Apple shares on Monday solidified near-term resistance around 204.50 as prices struggle climbing above the rising trend line from June 2016. Immediate support appears to be at 195.71 which if broken, exposes March 2018 highs at 183.50. Otherwise, resuming the uptrend from late May opens the door to eventually testing the April high at 215.31. 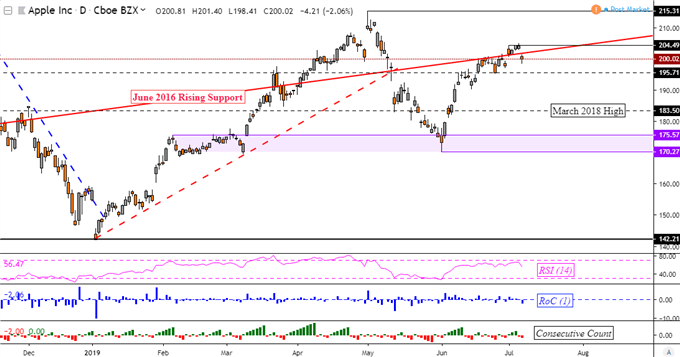 Another relatively quiet Asia Pacific trading session ahead of the aforementioned event risk places the focus for foreign exchange markets on market mood which is looking sour. S&P 500 futures are pointing notably lower heading into Tuesday trade. This may result in a rosy session for the anti-risk Japanese Yen at the expense of the sentiment-linked Australian and New Zealand Dollars.