US Dollar Back Above 2018 Rising Support on NFPs, Yen May Gain

Not sure where the US Dollar is heading next? We just released the third quarter Dollar fundamental and technical forecast !

US Dollar Gains on Jobs Report

The US Dollar outperformed against its major counterparts on Friday in somewhat illiquid conditions in the aftermath of the US Independence Day holiday. Its strength picked up pace prior to Wall Street open on the latest non-farm payrolls report where the country added 224k jobs in June versus 160k expected. While the unemployment rate ticked higher unexpectedly, so too did labor force participation.

Us front-end government bond yields rallied, propelling the US Dollar as aggressive dovish Fed rate cut bets seemed to have ebbed and stocks fell. Looking at Fed funds futures, chances of a 50 basis point cut in July dropped to nearly nil. However, prospects of a further 25bps reduction grew for September. As such, this looked more like an adjustment in timing for rate cuts rather than lowering expectations of them altogether.

This may have been why equities recovered in the aftermath. After a gap lower, the S&P 500 ended at 2990 (0.18 percent to the downside) after rising from peak lows at 2967. Meanwhile, the Canadian Dollar outperformed in the aftermath of a local employment report as well. While the country lost 2.2k jobs in June, hourly wage growth for permanent employees clocked in at 3.6%, the best growth in over a year.

This still left DXY ending its best week this year as prices rose back above the rising support channel from September 2018. Yet, resistance held at 97.52 as the Greenback gave up some gains towards the end of Friday’s session. Near-term support, aside from the rising channel, is a psychological barrier between 96.86 and 96.75. Confirming another close above this area may result in an extended recovery to May highs. 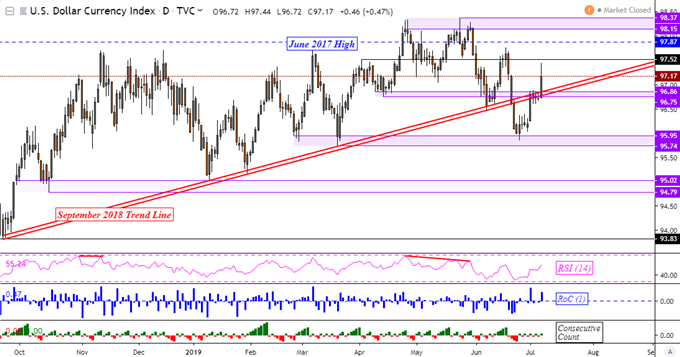 Still, S&P 500 futures were left pointing lower by the end of the day which could translate into timid weakness in Asia Pacific equities at the start of the trading week. As such, weakness in stocks may boost the anti-risk Japanese Yen as it tunes into sentiment behavior that may take the attention away from a speech from Bank of Japan’s Governor Haruhiko Kuroda. The central bank is still committed to its easing mode.