US Releases Specifics of $300b in Additional Chinese Import Tariffs

Stock and foreign exchange markets were once again rattled on Monday as the world’s largest economies effectively escalated their trade war. After the US raised tariffs on about $200b in Chinese imports from 10% to 25% last week, China responded with levies on US goods amounting to $60b despite threats from US President Donald Trump not to retaliate.

The trade war could be escalated further after the United States Trade Representative released the details of what could be additional tariffs on about $300b in Chinese imports, and the list is comprehensive. It may be turned to as further action in the event both nations don’t agree to a deal in about a month’s time. Here are just a few of the items that risk being taxed 25% on if they are imported from China and sold locally:

By the end of the day, the S&P 500 and Dow Jones tumbled 2.41% and 2.38% respectively, echoing declines in European and Asian equities in the prior sessions. Unsurprisingly, the best performing majors were the anti-risk Japanese Yen and similarly-behaving Swiss Franc. Excluding JPY and CHF, the highly-liquid US Dollar also performed well. Meanwhile, the pro-risk Australian and New Zealand Dollars suffered.

The market reaction to the details of the $300b in Chinese tariffs was rather mute, it was released after Wall Street closed. The focus for currencies during Tuesday’s Asia Pacific trading session will likely be on risk trends, with AUD perhaps showing some volatility to local business confidence data. Otherwise, S&P 500 futures are pointing lower which suggest risk-off trade to come which may boost JPY further. AUD/JPY appears to be extending its downtrend as anticipated.

With that in mind, AUD/USD has thus broken under a critical support range under 0.6982. This has exposed levels not seen since August 2015 and January 2016 as the pair extended its downtrend from the middle of April. With further confirmation, more losses could be in store for the Aussie. Otherwise, resistance could reinstate itself as the former support range between 0.7012 and 0.6982. 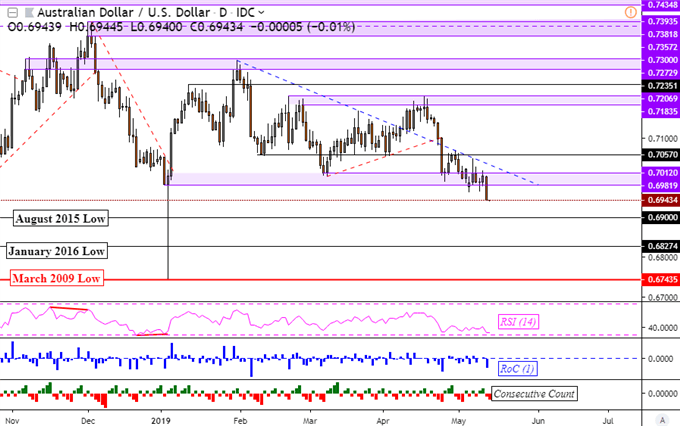