The Canadian Dollar was the best-performing major on Friday, supported by a better-than-expected local employment report. The nation added the most jobs in a month (+106.5k) on record in April as the unemployment rate fell and labor force participation rose. Domestic front-end government bond yields rallied, signaling ebbing Bank of Canada rate cut expectations.

Looking at the USD/CAD daily chart, the turn lower in the pair appears to validate a false breakout attempt above former resistance at 1.3469. This places near-term support at 1.3390, with the Canadian Dollar potentially eyeing the psychological barrier between 1.3251 and 1.3291 thereafter. If that is the case, we may be due for more consolidation in the medium-term, as has been the case since March. 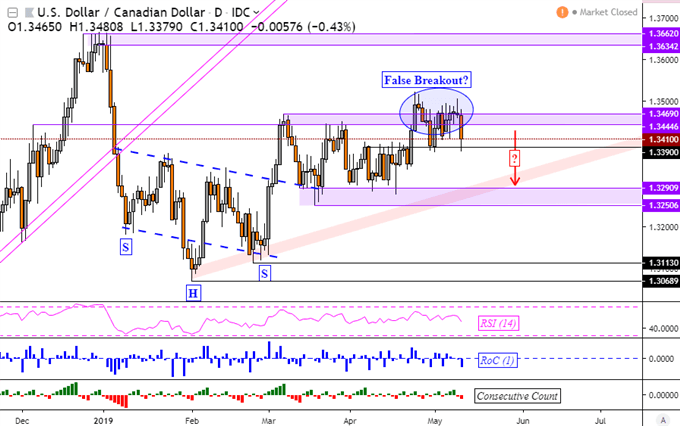 Meanwhile, the anti-risk Japanese Yen was one of the worst-performing majors on Friday. Market optimism generally pickup up during the latter half of the day despite the US and China failing to reach a trade accord. This resulted in the former nation increasing tariffs on about $200b in Chinese imports from 10% to 25%. The latter said that it had no choice but to retaliate.

The ‘risk-on’ trade on Wall Street seemed to be due to hopes that the two nations could still reach a deal in a month. That was how much US President Donald Trump gave China time before potentially adding on about an extra $300b in levies, which would capture almost all remaining imports. Later today, the US is expected to release the details on the remaining amount of potential tariffs.

The US Dollar traded sideways. Initial risk aversion on trade war fears likely weighed against the currency as the markets focused on increasingly dovish Fed monetary policy expectations. Then, gains in the S&P 500 later in the day were accompanied by rising front-end government bond yields. That signaled rising confidence which bolstered the Greenback. It is facing another potentially volatile week.

With that in mind, while Asia Pacific benchmark stock indexes might rise after cautious optimism on Wall Street, follow-through might be lacking given the uncertainty of where negotiations may go next. Meanwhile, the Australian Dollar, having lost most upside momentum after an unexpected RBA rate hold last week, eyes local home loans data.