Souring sentiment left its mark on financial markets at the beginning of this week, resulting in pronounced gains in the anti-risk Japanese Yen. It largely stemmed from disappointing economic news flow out of China during the Asia Pacific trading session. After reports that media giant Viacom might exit the nation, December’s trade data continued to add fuel to slowing Chinese economic growth fears.

The S&P 500 dropped about 0.53% in its worst trading day since January 3rd. But that was largely thanks to a downside gap. Crude oil prices faltered as anticipated in my weekly fundamental forecast given that economic weakness from the world’s second largest consumer of the commodity bodes ill. Towards the latter half of the session, US stocks and oil started recovering. The latter fared worse however.

Major benchmark stock indexes appeared to bottom after a couple of news. UK Prime Minister Theresa May suggested that the ‘more likely outcome’ should her exit deal be rejected (as is widely anticipated) is ‘paralysis in parliament which leads to a no Brexit’. The British Pound rallied and outperformed against most of its major peers. But given the numerous uncertainties ahead, gains were trimmed.

Then US President Donald Trump offered positive updates on ongoing trade negotiations (despite the higher Chinese trade surplus). He said that ‘we are doing very well with China’ and that he thinks that the US will get a trade deal with them. The pro-risk Australian and New Zealand Dollars trimmed some losses. Meanwhile the US Dollar was little change as given that demand for haven assets somewhat waned.

As we look to Tuesday, notable economic event risk is lacking during the Asia Pacific session. This places the focus for currencies on market mood. If the Nikkei 225 follows the S&P 500 lower, the Japanese Yen could extend gains. S&P 500 futures are pointing slightly lower. The British Pound will be awaiting today’s vote on Theresa May’s Brexit deal as EUR/GBP is attempting to reverse its near-term uptrend.

As anticipated in my weekly Australian Dollar technical forecast, AUD/JPY prices failed to push above a critical resistance barrier and it has now been reinforced. On the daily chart below, the highlighted yellow ellipse is a barrier that is composed of a 2008 trend line, a falling resistance line from early December and a horizontal range in-between 79.055 and 78.691. Prices appear to be pointing lower and if resistance holds, 75.24 may be the next trajectory. Especially if market mood sours over the course of this week. 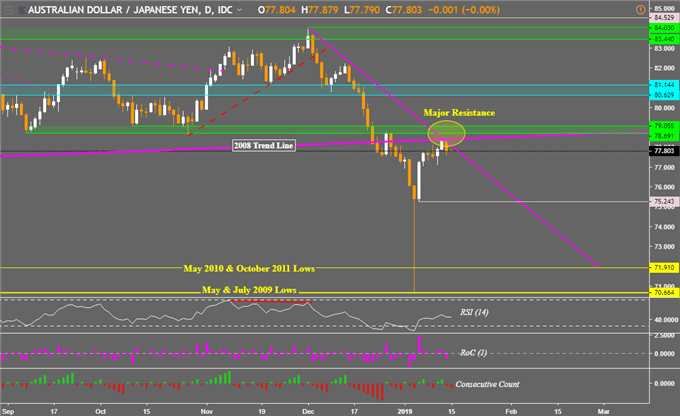 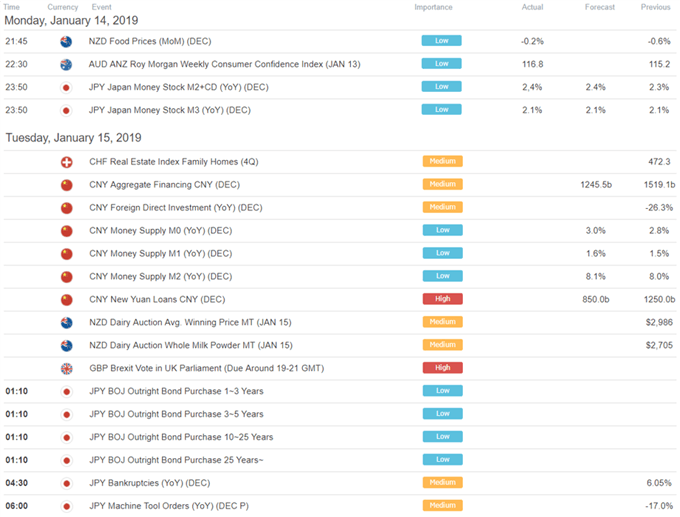